WASHINGTON With the announcement today of the deployment of the aircraft carrier USS Dwight D. Eisenhower (CVN 69) and its strike group the US Navy has three deployed groups, more than in several years — a far cry from last summer when only one group was overseas and mid-2018 when no flattops were deployed. 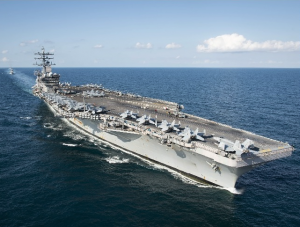 The Eisenhower deployed from Norfolk while at sea concluding its final pre-deployment exercise. The Navy has not announced the carrier’s schedule but she is could operate under Sixth Fleet control under US European Command before heading to the Middle East.

USS Harry S. Truman (CVN 75) is operating in the Mid East under Central Command, having deployed from Norfolk in November. USS Theodore Roosevelt (CVN 71) is operating with the US 7th Fleet in the Western Pacific after deploying from San Diego in mid-January.

Additionally, USS Nimitz (CVN 68) is working up on the west coast and will likely deploy in the spring.

That makes three of the Navy’s eleven carriers deployed with one more preparing to do so – 27 percent deployed, 36 percent if the Nimitz is counted. That’s against the average of 15 percent of the carrier force deployed since 2018 and the 22-to-25 percent figure since 2013, a figure calculated by USNI News in a report last September.

It also compares favorably to last summer, when only the USS Abraham Lincoln (CVN 72) was deployed, and to 2018, when no US Navy carrier was deployed for six weeks between July and August – an unprecedented situation in the years following the outbreak of the Korean War in 1950.

There is never a situation where all 11 carriers are ready to go. For one thing, there aren’t enough aircraft to fill out all eleven decks, since one ship is always in an extended refueling overhaul, lasting three to four years, while usually two others are in a year-long overhaul, and all carriers have periodic pier side maintenance periods.

The Navy has faced scathing criticism for readiness issues across the fleet, including surface ships, submarines and aircraft. The Atlantic Fleet has had a particularly acute problem with its aircraft carriers, with the Navy’s shipyard in Norfolk, Virginia coming under special scrutiny, failing over several overhauls to complete carrier work on time. The Eisenhower itself was scheduled to deploy in the fall of 2019 but was unable to meet that deadline as the shipyard work package missed goal after goal and the Truman was called on for a short turnaround deployment.

The Truman also missed its September departure date when an electrical power distribution problem sidelined the ship for three months, a situation that led the Navy to deploy its escorting cruiser and destroyers on time as a Surface Action Group rather than wait for the carrier.