The upgrades would represent an additional $80 million to $100 million investment from both private and public sources, Hunt said.

Fincantieri has invested well over $100 million in facility upgrades since buying the shipyard in 2009 from Manitowoc Marine Group. Those improvements include a number of new buildings and a completely revamped and modernized production workflow plan.

Fincantieri already builds US Navy Freedom-class littoral ships for prime contractor Lockheed Martin at the yard and in December began fabrication of the first of four Multi-Mission Surface Combatant (MMSC) warships for Saudi Arabia, built to a variant of the Freedom-class design. Lockheed also is the prime contractor for the MMSC under a nearly $2 billion US Navy foreign military sales production contract.

Whether or not the FFG(X) contract is secured, the Marinette facility will be modernized with the installation of a new syncrolift facility to replace the existing sideways launch process, Hunt said.

Situated on the narrow Menominee River between Wisconsin and Michigan’s Upper Peninsula, Marinette has long used the spectacular sideways process which quite literally creates a big splash as a ship is launched sideways into the river, but like all moving launches places strain on a hull that can sometimes result in damage or wear. Most modern shipyards have switched to some sort of level transfer method, including the syncrolift, which typically places a ship on cradles supported by wheeled vehicles to move around a shipyard and onto a facility that lowers the ship in the water with virtually no strain.

Marinette is one of the last builders of ships for the US Navy not to use a syncrolift or similarly level system.

In addition to the syncrolift, Marinette’s expansion plans include an additional preparation and blast paint facility, a module/grand module construction facility, and a new final hull erection and outfitting hall, a major facility that would replace the shipyard’s existing large parking lot. Parking would be moved nearby, Hunt said. 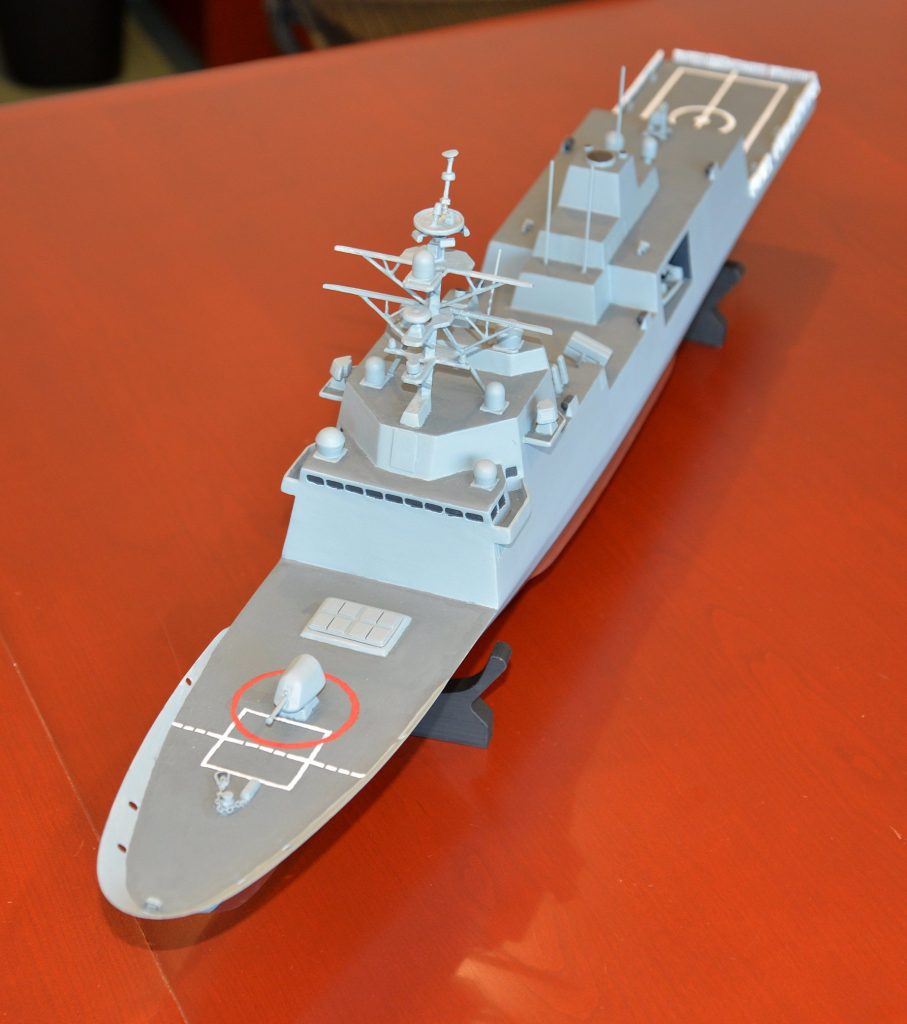 In addition to shifting virtually all production indoors the additional facilities will allow Fincantieri to launch the frigates at a high state of completion, Hunt said. LCSs are launched into the water at about 80 percent complete, he noted, while the plan for the frigates will put ships into the water at over 90 percent complete. “We’re shooting for 96 percent,” he said.

Shipyards the world over strive to complete as much of a ship as possible before putting it into the water, where labor, effort and costs rise dramatically.

Hunt also revealed that Marinette plans to build the frigates in four major grand blocks, or large sections that would be assembled in the erection hall. The hull will be built in three major sections – fore section, midsection and after section – plus the superstructure block.

The shipbuilders will use Fincantieri Bay Shipbuilding in nearby Sturgeon Bay, Wisconsin to build the fore section, Hunt said, barging the structure to Marinette for final assembly.

Bay Shipbuilding is heavily engaged in commercial work, both for new construction and repair, and features several new facilities under a Fincantieri expansion plan that also provided a new floating drydock.

Fincantieri also plans to use its ACE Marine facility in Green Bay, Wisconsin to manufacture and assemble key aluminum structures for the frigates, including the tripod masts.

Constructs whereby different sections of ships are built at different shipyards and shipped for assembly are common throughout the world. In the US for example, Virginia-class nuclear submarines are built at Huntington Ingalls Newport News Shipbuilding in Virginia and General Dynamics Electric Boat in Connecticut and Rhode Island, the companies shipping portions of each submarine to the other for final assembly.

Hunt also noted that for the trip through the Great Lakes to the Atlantic the frigates will be virtually complete except for the topmast, which because of height restrictions on the Saint Lawrence Seaway will need to be installed at a US east coast location. The mast “is not a major component,” Hunt noted.

The Navy is reviewing bids for the FFG(X) contract and is in the question and answer phase of the bids which were submitted last year, Hunt said. A series of industry responses was provided to the Navy by Jan. 7, he said, and Fincantieri expects at least one more round of questions and answers before a decision is made.

Fincantieri is competing with General Dynamics Bath Iron Works, Austal USA and Huntington Ingalls Industries Ingalls Shipbuilding for the frigate contract. A detail design and construction contract for the first FFG(X) is expected to be awarded in July along with options for nine more frigates. The Navy is expected to purchase at least 20 frigates through 2030.

The frigate program is the first significant new-construction US Navy surface combatant effort since the inception of the Littoral Combat Ship in the early 2000s.