The aircraft carrier Gerald R. Ford (CVN 78) is the most expensive ship ever built by the US government, and quite possibly by any government. No one knows the true price given the various computational ways to figure the costs of design and development of the ship and its various systems, building the carrier and buying thousands of installed systems and components, and getting all those systems to work as intended. The final bill isn’t in, but all things considered, it is safe to say it will be somewhere north of $15 billion.

The ship is a long way from being ready to take to the seas in defense of the nation. While construction began in 2005 and the Ford was delivered to the Navy and commissioned in 2017, it’s been back in the shipyard since July 2018 undergoing a series of fixes known as a post-shakedown availability, a planned event all US Navy ships go through but that is more difficult with this first-of-class ship full of new and hitherto untried technologies. It’s hard work for all involved and it will not be nearly finished when the ship comes out of the yard as expected later this month to renew testing and development of its systems whether or not they’re fully functional.

Four major systems in the ship will continue to need work: the Electromagnetic Aircraft Launch System (EMALS), the Advanced Arresting Gear (AAG), the eleven Advanced Weapons Elevators (AWEs) and the Dual-Band Radar (DBR). Issues with those developmental, new-technology systems have been widely reported on for years, ever since Defense Secretary Donald Rumsfeld under the banner of transformation ordered them installed on the first ship in the new class despite deep Navy reservations and recommendations against doing so.

Less talked about are the ship’s electrical and propulsion systems. The Ford’s more-than-100-megawatt electrical system is far more powerful than the 30 MW systems installed in the ten ships of the previous Nimitz-class carriers, and all that power is crucial to the operation of the four major developmental systems.

The power plant is driven by two new-design nuclear reactors which, by the skimpy information provided to the public, seem to be working fine. But according to numerous sources, there are problems – often unspecified — with the propulsion plant.

One issue that was reported involved the failure of main thrust bearings, fixtures that bear the weight of rotating propeller shafts. Twice, in April 2017 and again in January 2018, the Ford suffered main thrust bearing failures while at sea and was required to head back to port. The Navy did not publicize these problems, which were unknown to the public until Bloomberg’s Tony Capaccio reported them in May 2018.

Other reported problems include significant delays with initial sea trials due to issues with voltage regulators on the four main turbine generators. Reports persist that one main propulsion turbine had to be virtually rebuilt after a 2016 accident caused significant damage to its rotors. Some of those accounts add there was serious damage to a second turbine.

It’s hard to tell specifically what’s going on as Navy and industry decline to go into specifics or to confirm the reports. But the accounts persist, and it could be that one of the most serious problems with the Ford is not up top where the aircraft handling systems and radars are, but deep down in the hull where the propulsion plant lies. 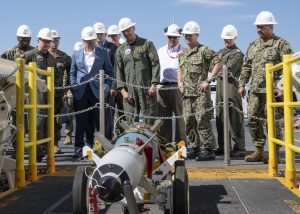 What is abundantly clear is that candor and honesty are not hallmarks of the carrier program – an incredible state of affairs given the enormous cost of the ships and their deep significance to the nation’s defense. Quite apart from the very legitimate need for secrecy about classified combat system and propulsion information are fears to disclose even the most mundane details – witness the dearth of photography put out by the service over the ship’s initial 81 days at sea. After an initial spate of photos taken when the ship was delivered and commissioned, exceptionally few images have been released to the public – and those that were strained to avoid showing much of the ship, instead focusing on closeups of people aboard her or, if on the flight deck, with an out-of-focus ship’s island in the background. This stands in stark contrast to the constant stream of images and videos put out by every other carrier in the fleet when they’re in port and underway.

Media would love to photograph and report on the ship, but they’re banned from underway visits. At no time during those initial 81 days at sea was any member of any media aboard despite numerous requests to do so. No reporters did standups from the flight deck with the scream of jet engines behind them. No one interviewed sailors on board about what it’s like to live and work on such an advanced-technology ship. No ship’s captain talked about the wonders of the new systems. No one was allowed to inject the “wow” factor into their reporting – the awe and wonder virtually anyone has the first time they see and ride on a massive aircraft carrier carrying out flight operations at sea.

Why this secrecy? A good question which, when asked, is often met with shuffles and explanations that the ship isn’t yet ready, that it would be a distraction, that passenger-carrying aircraft aren’t yet qualified to land on the ship.

Contrast that abundance of caution and secrecy with the British experience now on full display with the Royal Navy’s new Queen Elizabeth-class carriers. Not only are the two ships the largest and most expensive warships ever built in the United Kingdom, they represent a far higher portion of their country’s overall budget than does the Ford class in the US. The Ford is basically a newer and heavily-modified version of the previous Nimitz class design, and the infrastructure to design, build, operate and maintain the ship is well established in the US.

Not so in Britain, where the government decided in the early 1980s to get out of the big carrier business. Their ships were decommissioned, their planes taken out of service, their escort ships gotten rid of and their people reassigned to different career paths. The industry that supported British carriers all but evaporated. The effort to reconstitute that for the Queen Elizabeths is phenomenally expensive and politically astounding.

And the Brits have gone to great lengths to let the public know what they’re paying for. Constant publicity and heavy media coverage have been a hallmark of the program. When the ships first went to sea – Queen Elizabeth in June 2017 and the Prince of Wales in September 2019 – photos and videos were everywhere, including live videos of the ships underway of the first time. Hundreds of reporters and visitors have been on board the ships, an effort continuing this month as the Queen Elizabeth operates off the US coast with her US-built Joint Strike Fighters. There is no question the ships have had and continue to have developmental problems, but the constant public attention has created a sort of we’re-in-this-together feeling unknown on this side of the Atlantic.

Professional military people make careers thinking about how to deal with potential enemies, and the history of the US displays no shortfall of bravery, heroism and forthrightness in dealing with the country’s foes. But Navy officials are scared and afraid. Afraid of Congressional and governmental oversight, afraid of public criticism, afraid of an informed media, and afraid of each other’s internal sniping – which seems to know no end. Senior officials will strongly deny it, but the fear is palpable, quantifiable, widely acknowledged on the inside and obvious from the outside.

Sources say when the Ford renews its trials and development period there will be a heightened sense of urgency and activity. That would be good to see – if the Navy can conquer its fears and lets us.