NORFOLK, Va. – With Hurricane Dorian moving up the eastern seaboard, the Navy started moving 23 ships and 114 aircraft from multiple Hampton Roads bases out of the storm’s path, today.

“Based on the current track of the storm, we made the decision to begin to sortie our Hampton Roads-based ships and aircraft,” said Vice Adm. Andrew “Woody” Lewis, Commander, U.S. 2nd Fleet who issued the sortie order on Tuesday night.

“This allows time for our assets to transit safely out of the path of the storm.”

The storm’s effects aren’t expected to start being felt in the Hampton Roads area until Thursday night.  Local forecasters are saying the bad weather conditions could last well into Friday before the storm is expected to move further out to sea.

Currently a Category 2 hurricane, it’s now expected to arrive off the mid-Atlantic region as a Category 1 storm. But officials say even that is nothing to take lightly.

That’s why Navy officials in the area have been eyeing Dorian now for days, planning for contingencies as the storm’s track became clear. Last week, the Navy evacuated ships and aircraft from the Jacksonville, Florida, area. Now it’s Norfolk’s turn.

According to Capt. Derek Lavan, 2nd Fleet’s chief of staff, planning for the Norfolk mass sortie has been in the works since the projections the storm would move up the Atlantic seaboard, he said. The decision came down, yesterday to execute that plan.

“It’s actually pretty impressive with all the planning that goes into it beforehand,” Lavan told reporters Wednesday morning.

“Once the plan is in place, in a matter of hours we can get 20 plus ships to sea pretty efficiently.”

That planning has to take into account the number of tug boats available and even timing of the tides for the larger ships.

The mass exodus from Norfolk Naval Station started Wednesday morning and by noon only a handful of vessels remain at their piers.

Two aircraft carriers, the John C. Stennis and the Dwight D. Eisenhower led the parade out to sea. They were followed by a steady stream of submarines, cruisers, destroyers as well as amphibious, logistics and other support ships.

Even the Royal Netherlands Navy’s frigate De Ruyter here on a port visit headed back to sea to avoid the storm.

One thing Lavan said helped today’s operation was the fact that a number of ships were already out operating, already able to dodge the storm.

“Fortunately we had come exercises going on,  so roughly about a dozen ships were already at sea, reducing the number of ships we have to get underway, today,” he said.

Some ships, Lavan said, will be left behind because they’re currently undergoing maintenance and not able to get underway.

As of  Wednesday afternoon, the tally of those staying put was at 21. These ships are not only at Naval Station Norfolk, but spread out at other bases and shipyards around the Hampton Roads area.

That includes four aircraft carriers. The Harry S. Truman, which is readying to deploy and will remain at Naval Station, Norfolk.  Across the Hampton Roads in Newport News are the carriers Gerald R. Ford and the George Washington currently in maintenance at the Huntington Ingalls Shipyard. The carrier George H.W. Bush is at the Norfolk Naval Shipyard, down the Elizabeth. River in Portsmouth, Virginia.

Lavan said the Navy actually prefers to get ships underway and not have them ride out heavy weather next to concrete piers.

“Ships are designed to handle some pretty adverse conditions such as high winds and heavy seas, but in port and up against concrete piers, that’s wasn’t what they were designed for,”  he said.

For those ships riding out the weather in port, the Navy will take extra precautions Lavan said. For example, they’ll possibly spreading them out between the now vacant piers to reduce hazards.

Skippers will have the leeway to take their own extra steps by increasing mooring lines to dropping their anchors and even disconnecting shore power to avoid damage.

It’s a very similar scenario at the airfields around the Hampton Roads area, too, as those aircraft able to get aloft will do so and fly West, well out of the storm’s path.

“So a lot of what we’re doing now is putting our flyable assets in other places so if they’re needed right after the storm they can be utilized,” said Capt. Shawn “Opie” Bailey, Commander Helicopter Sea combat Wing Atlantic. 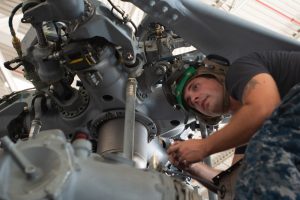 “We have 36 helicopters that are going to potentially leave this area, today they’ll head to various places in Tennessee, Kentucky and Florida.”

Other helicopters, he said,  will be heading to sea, supporting many of the ships that got underway today. Bailey said their job will be to assist in search and rescue operations, if necessary.

Those remaining because of maintenance issues will be brought into hangers that are built to withstand high winds for protection.

“It’s pretty important that we keep our aircraft operable,” he said. “We also have some units on standby to provide defense support to civil authorities — we haven’t been asked to do that, yet, but we’re standing by in the event we’re called.”

The job of those sailors remaining on base will be to minimize the potential damage the storm could bring with it’s high winds and rising waters.

“Our Mid-Atlantic team has been working diligently to provide support to both our military and civilian personnel, as well as their families, to ensure their safety during this very stressful time,” said Rear Adm. Charles Rock, who commands Navy Region Mid-Atlantic. “It is equally important that we are able to recover as quickly as possible after the storm passes to support the fleet when they return.”

Part of the responsibility for seeing the base through the storm falls to the Naval Station, Norfolk Disaster Preparation Team.

On Wednesday afternoon Construction Electrician 1st Class (SCW/EXW/AW) Felton Randal was overseeing a group of sailors filling sandbags at the Base Operations headquarters.

“Yesterday issued 3,200 bags to different entities and we will continue to issue bags until either all the bags are passed out or all the facilities are taken care of.” 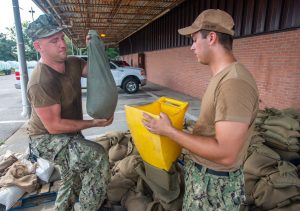 Randal said that other sailors are combing the base, looking for any objects that could become a projectiles should high winds arrive.

Teams are also removing hazards and debris from drainage areas, removing large items from waterfront areas, ensuring emergency generators and vehicles are topped off with fuel, and filling and preparing potable water supplies.”

“It is important that our Navy families are informed of all resources available to them and have a plan in the event Hurricane Dorian affects our Region,” said Rock.

“Personnel should also discuss evacuation plans and reporting requirements with their chain of command.”