NORFOLK, Va. — A flotilla of multi-national warships is operating off the U.S. East Coast, training for high-end ops at sea with the U.S. Navy in a move that help better integrate the combined sea-based muscle of the North Atlantic Treaty Organization’s maritime forces.

It’s a standing naval task group that few American’s are aware exists, even though NATO fleets have prowled the high seas for decades as part of the trans-Atlantic alliance. Like the countries they represent, their focus is returning to the defense of the North Atlantic.  Their mission is again to deter a resurgent Russia’s presence in the region.

A frigate from the Royal Netherlands Navy will join them, soon.

“The objective of the standing NATO maritime forces is to be able to provide the alliance with a continuously manned, continuously formed up force to be able to immediately respond to a contingency,” said Rear Adm. Ed Cashman, the current group one commander in an Aug. 21 interview with Defense and Aerospace Report.

“We actually exist continuously, ships rotate in and out, Cashman said. “Command rotates between the different countries in the alliance, but the force always exists.” 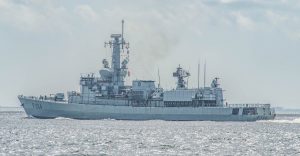 The U.S. Navy doesn’t always have ships assigned to NATO duty. This fact plays into a lack of exposure this side of the Atlantic.

Instead, they take their place in the rotation along with the other allied Navies. When he took command, Cashman relieved a Danish admiral. He is the first U.S. flag officer to lead a NATO task group since 2014, he said.

NATO countries detail ships to the group for three to six month tours. Others operate with the group for shorter periods during multi-national exercises and operations.

“They join the task group, we integrate with standard procedures and standing NATO doctrine, and we train and operate together to maintain readiness in case we’re called upon,” he said.

Traditionally the nation the commander hails from provides the group’s flagship, he said.

Consequently, Cashman’s tour in command began in January in Copenhagen, Denmark, on board the Norfolk-based guided-missile destroyer Gravely.

During a July port visit to Rota, Spain, he and his staff transferred to the Everett Washington-based destroyer Gridley in a rare appearance of a West Coast U.S. ship tabbed to operate in the Atlantic and Mediterranean.

Cashman wasn’t sure how the Gridley was selected for the job.  Regardless, he says the unique deployment for a Pacific-focused ship is bonus for the Gridley crew who get to operate with NATO forces in an around Europe.

His staff, too, has a multi-national flavor.

This diverse scene plays out in each of NATO’s four standing maritime groups which operate constantly in the Atlantic, the Mediterranean or wherever they’re needed.

Two of these groups are focused on surface warfare, as is Cashman’s, and thus employ destroyers and frigates, he said. Two mine countermeasures groups also exist and employ ships assigned suited to that mission.

Currently the Gridley is the only U.S. ship in any of the forces.

“If there’s a crisis or contingency, NATO Response is to activate these very high readiness task groups that are immediately deployable,” Cashman said.

These standing groups of ships  have existed in the alliance since its creation in 1947. Then, as now, they gave NATO a unified front to the then Soviet Union, Cashman said. They were overhauled to their current structure roughly 15-years ago.

“The standing maritime groups are a classic example of the fact that an alliance is a way to leverage the assets of all the nations acting together,” said retired Adm. James Stavridis, who commanded NATO from 2029 to 2013.

“As supreme Allied Commander of NATO, I deployed them with great effect in Balkan waters, in counter piracy operations off the coast of Africa, during the Libyan conflict, and on various humanitarian missions.

The United States and its NATO allies are again preparing in earnest for the high-end combat at sea. Consequently, these groups are taking on a new level of urgency to focus on defense of North Atlantic, once again.

“Perhaps we we took for granted the North Atlantic for a number of years,” Cashman said.  With no active Soviet naval presence, NATO and its nations were instead focused on areas such as Afghanistan and Iraq, he added.

Now, with Russia resurgent, it’s back to the future.

“The North Atlantic is really a bridge connecting the US and Canada with our allies in Europe —  the strategic importance is of this North Atlantic bridge is one of the core foundational priorities of the alliance that we are returning a greater focus to, now.” 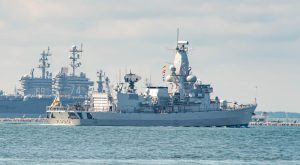 And that’s why this NATO task group operating off the U.S. eastern seaboard, as NATO looks at how “we generate the train forces and the types of contingencies and things that we that we prepare for,”  to better maintain the “close link back and forth across the Atlantic,” Cashman said.

Right now, Cashman’s group is taking advantage of “valuable training and engagement with the fleet” in the “Virginia Capes operating area off the coast here.”

Next, they’ll head up the coast to operate with the Canadian Navy. Then it is “back over to the eastern side of the Atlantic” exercise in their “traditional Allied operating area.”

It’s all about learning to operate together, Cashman said. That muscle memory comes only from such constant contact between all the allied navies.

“We’re linking in with standing NATO procedures that our allies use pretty regularly and part of what we’ve learned is to make sure that we’re constantly looking at technical and interoperable issues as well as procedural and operational issues,” Cashman said.

“It’s about making sure we stay as closely aligned as we can so we’re so that we’re able to quickly come together and immediately start operating, regardless of what the construct is and what the command structure is.”