It sometimes happens – for a variety of reasons

The nation-wide movement to remove names that honor or glorify the Confederate cause is an issue confronting the US military not just in the public eye but also in the halls of Congress. The Senate Armed Services Committee, in its June 11 markup of the Fiscal Year 2021 National Defense Authorization Act, inserted a provision:

“Establishing a commission to study and provide recommendations concerning the removal, names, symbols, displays, monuments, and paraphernalia that honor or commemorate the Confederate States of America, addressing an implementation plan, cost, and criteria for renaming, among other procedures. The implementation plan is to be implemented three years after enactment.” 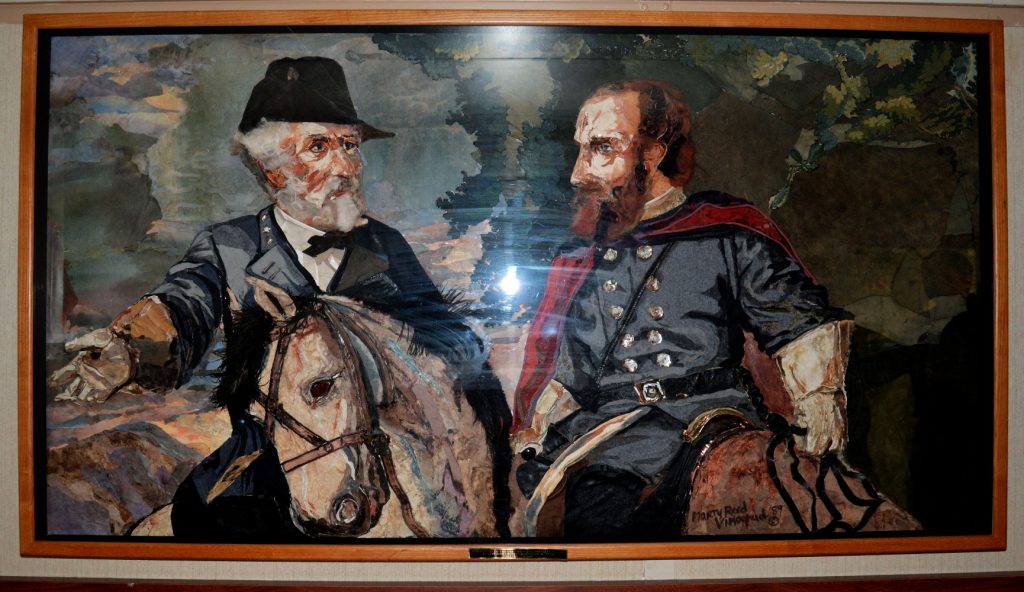 The brow of the cruiser USS CHANCELLORSVILLE proclaims the ship’s motto, “Press On,” part of a directive from Confederate Gen. Robert E. Lee after his deputy Gen. Stonewall Jackson was wounded during the Battle of Chancellorsville in 1863. The painting of Lee and Jackson, photographed in 2016, is displayed in the cruiser’s wardroom. (Chris Cavas)

The Republican-led committee adopted the overall bill with a bipartisan vote of 25-2, and the measure now heads to the Senate floor for consideration. To become law it still needs to be adopted by the whole Senate, survive into the House-Senate NDAA conference bill and then signed by the president.

At immediate issue are ten US Army bases named for Confederate officers, as well as the cruiser USS CHANCELLORSVILLE (CG 62), which memorializes a land battle considered to be a Confederate victory, and USNS MAURY (T-AGS 66), a survey ship that honors Commander Matthew Fontaine Maury, the first superintendent of the US Naval Observatory and who gained worldwide fame as an oceanographer for the US Navy. Maury also served in the Confederate Navy, but since 1918 four US Navy ships have carried his name.

The Navy generally refrains from renaming its ships once they’ve entered service. Politics and social mores certainly play a part in choosing the names of new ships, and it is not unusual for a ship to be renamed one or more times prior to entering service, but it would be quite unusual for ships to be renamed in service due to changing sensitivities.

Renamings usually take place because of an imperative to quickly honor a person or event. They can also accompany a change in function such as converting a ship to a different purpose or because a naming scheme for a certain class of ships might change. Other changes might be for stylistic or administrative reasons and in those cases the core names are retained even if the rendering changes. Prior to construction names have often been swapped among ships of a class for a variety of reasons, including the symbolism of building a particularly-named ship in a particular state or city.

During World War Two new ships were often renamed for ships lost in combat or for other reasons. To perpetuate or commemorate the names faster the practice was to make the name changes to ships nearing completion rather than on new ships yet to be built.

Looking back over the past 120 years or so, here are some examples of name changes. Many of these instances involve types of ships or naming schemes long since discarded by the Navy. There are many more cases of name changes, far too many to list here.

And yes, it can get very complicated! 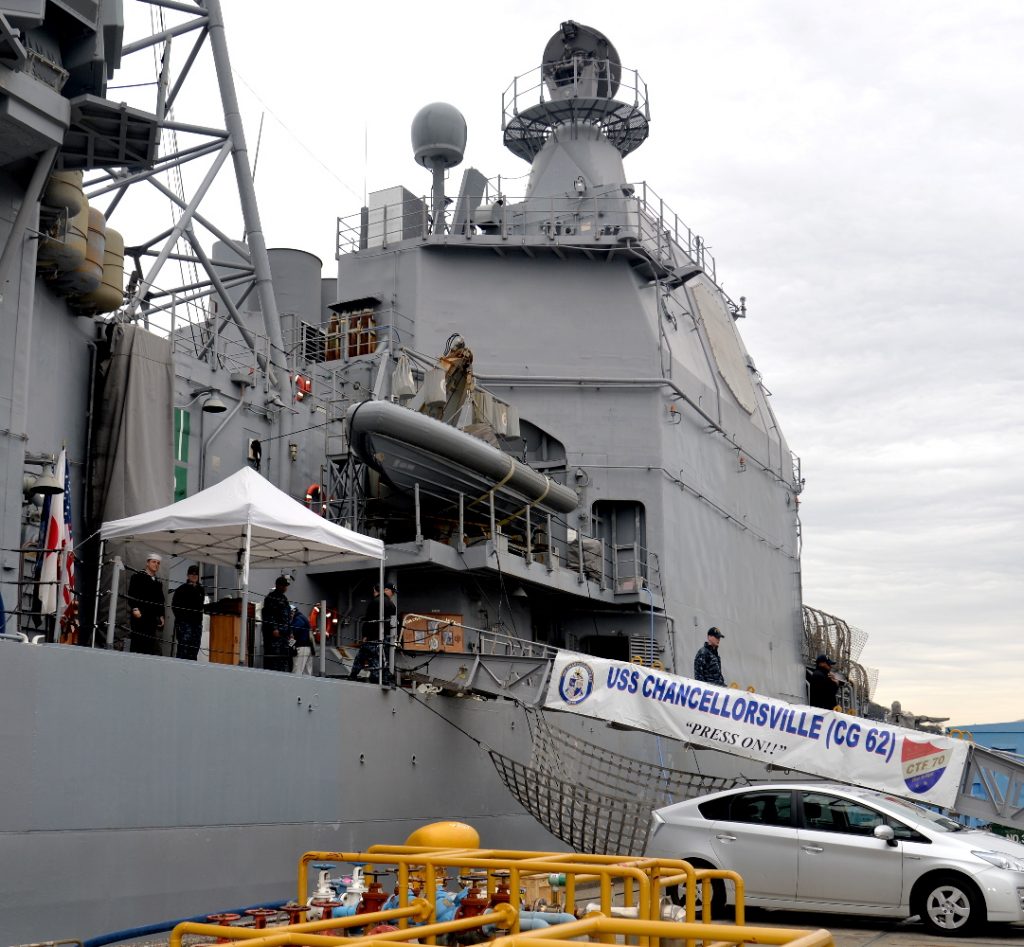 The brow of the cruiser USS CHANCELLORSVILLE proclaims the ship’s motto, “Press On,” part of a directive from Confederate Gen. Robert E. Lee after his deputy Gen. Stonewall Jackson was wounded during the Battle of Chancellorsville in 1863. The painting of Lee and Jackson, photographed in 2016, is displayed in the cruiser’s wardroom. (Chris Cavas)

Changes due to ships lost in combat

Acquired from other sources 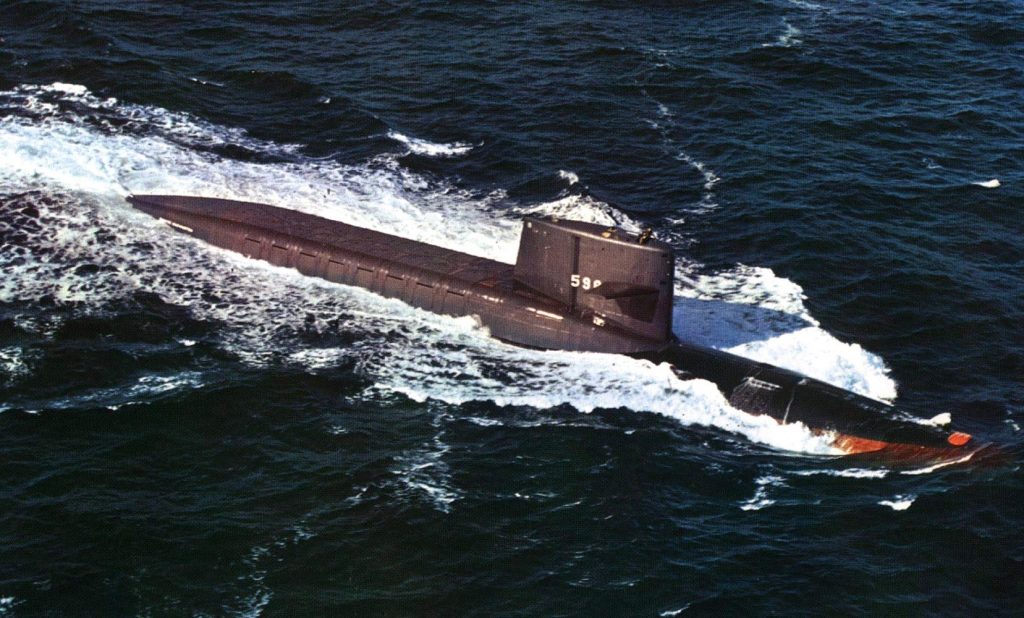 The name and designation of the submarine USS SCORPION (SSN 598) was changed in 1958 after the design and mission of the ship changed. The submarine was commissioned in 1959 as USS GEORGE WASHINGTON (SSBN 598), first of the famous “Forty-one for Freedom” ballistic missile submarines of the Cold War. Several of those submarines also bore names related to the Confederacy. (US Navy)

Political and other changes