Norfolk, Va.  – The steady drizzle and grey skies did not dampen the spirits of hundreds of sailors and family members as the guided-missile cruiser Leyte Gulf found its way back to Naval Station Norfolk Jan. 4, after 283 days away from home.

The ship left Norfolk with the Abraham Lincoln Carrier Strike Group on March 27.

Their deployment was expected at the outset to be of the roughly six-month variety. It was expected to end with Leyte Gulf escorting Lincoln through 7th Fleet to its new homeport of San Diego. 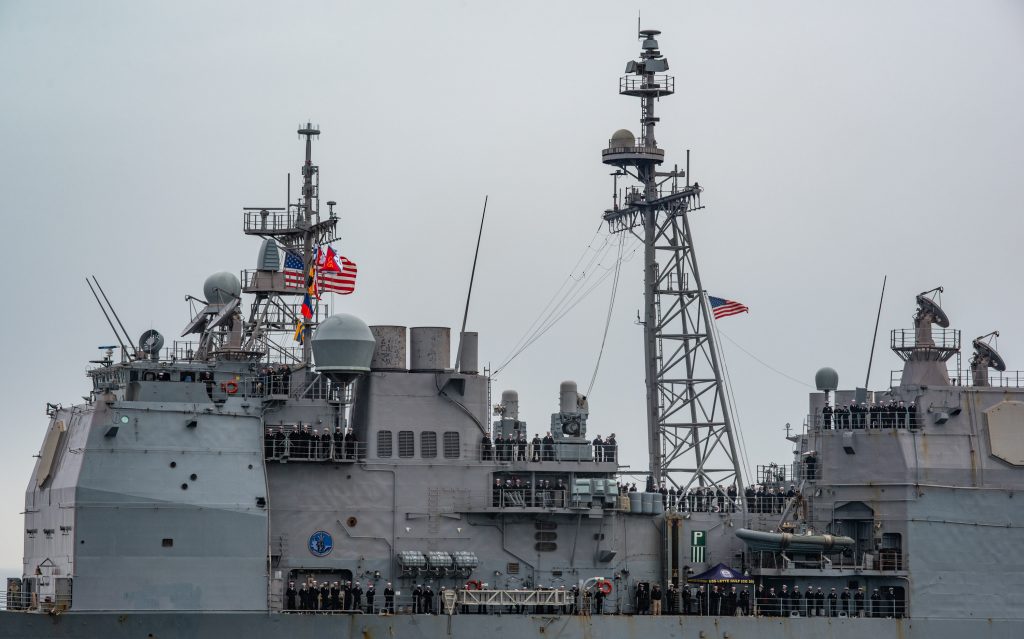 Sailors “man the rails” as the the guided-missile cruiser Leyte Gulf, turns into the pier upon arrival at Naval Station Norfolk, Jan. 4. (Photo by Mark D. Faram)

Had that plan played out, Leyte Gulf would have circumnavigated the globe with Lincoln and return to Norfolk through the Panama Canal as several other cruisers have done in the past.

It didn’t work out that way.

With the aircraft carrier Truman’s electrical issues keeping that ship in Norfolk longer than expected, Leyte Gulf and Lincoln, with the embarked Carrier Air Wing 7 and embarked staffs, were needed to hold down the fort in 5th Fleet a while longer as tensions with Iran smoldered.

“We operated with Lincoln, worked up with Lincoln and established a lot of relationships, spending over seven months at sea as part of the Lincoln Strike Group,” Capt. William “Grady” Musser, Leyte Gulf’s skipper, told reporters on the pier after the ship’s arrival.

That delay is what returned Leyte Gulf home the traditional way for East Coast ships. 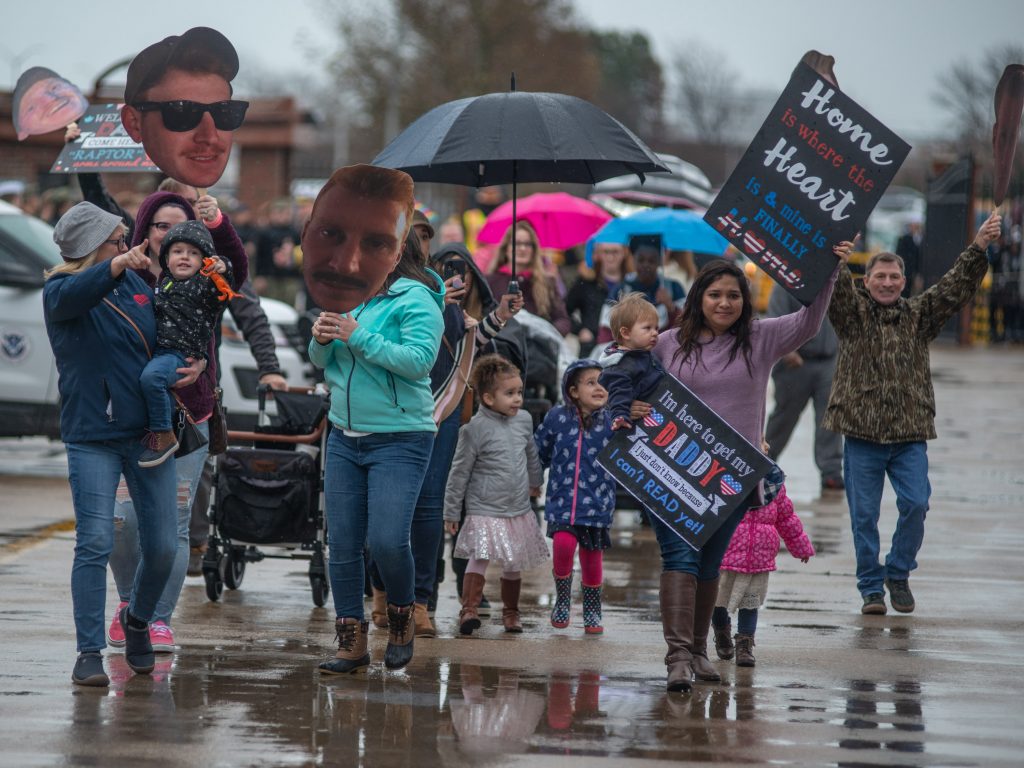 Friends and Family walk down the pier, minutes after the guided-missile cruiser Leyte Gulf tied up at Naval Station, Norfolk after nine-months away. (Photo by Mark D. Faram)

“Our deployment had ended and it was time for us to come back home,” Musser said. “That’s why we executed our transit back through the Mediterranean.”

Lincoln is still on deployment along with its embarked air wing and staff.

That ship is now in 7th Fleet, making its way to San Diego a little later than expected. The remaining ships of Strike Group 12, the Norfolk-based guided missile destroyers Bainbridge, Mason and Nitze returned to Norfolk in November.

Still, for the Norfolk based crews, it will be a memorable cruise. The collection of ships spent most of their time away on the tip of the spear. Each having a ringside seat to rising tensions with Iran in the Arabian Sea and Persian Gulf.

“Long deployments are something we expect, sometimes they go longer than what you plan,” Musser said. “There’s always a challenge for the sailors to understand what they’re doing and why — once you explain it to them, they have an opportunity to understand what we’re dong around the world.” 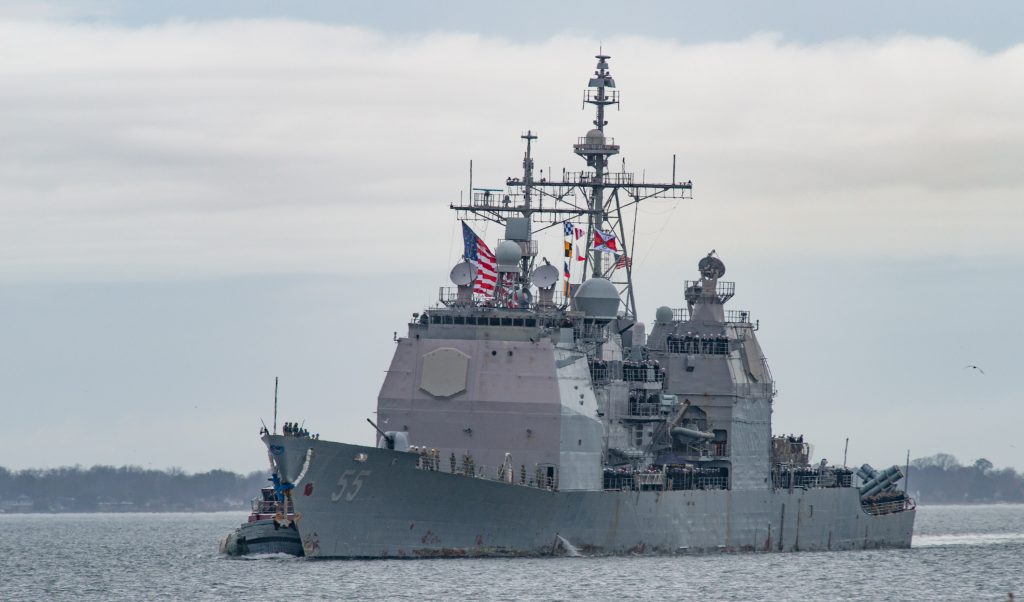 The guided-missile cruiser Leyte Gulf, showing the signs of nine months at sea, Navigates the Elizabeth River during its return to Naval Station Norfolk, Jan. 4. (Photo by Mark D. Faram)

The flip side of the extended deployment  and the constant drumbeat of both real world and training operations gave his sailors the chance to grow professionally.

“Deployments are our time to put into practice all of the skillsets that we work to develop prior to getting underway,” Musser said. “The accomplishments [our sailors] make on these deployments as they increase in rank, as they become more qualified and see what they can achieve that becomes a real point of pride when you come back home and have those accomplishments behind you.”

In the end, Leyte Gulf would steam over 50,000 nautical miles since the strike group’s late March departure from Norfolk.

Spending their first month deployed in the Mediterranean the strike group was tabbed to quickly head to 5th Fleet as tensions with Iran flared in early May.

After a three-day liberty call to Athens Greece, Leyte Gulf continued her journey home. The ship made her westbound transit through the Strait of Gibraltar just after midnight on Dec. 27.

“The crew of Leyte Gulf demonstrated professionalism and dedication at every turn, and made a major impact on our strike group,” said Rear Adm. Michael Boyle, commander, CSG 12. “They should return home knowing that they positively contributed to maritime security in some of the most consequential waterways in the world.”

Boyle had taken command of the strike group this past summer from Rear Adm. John Wade, who is now the Director of Maritime Operations at Fleet Forces Command. Wade was waiting on the pier to greet the crew as they tied up.

It was the final deployment on Leyte Gulf for Electronic’s Technician 3rd Class (SW) Johnathan Webster whose been on the ship for the past four years. He’ll rotate to shore duty in Kings Bay, Ga., in a couple months. 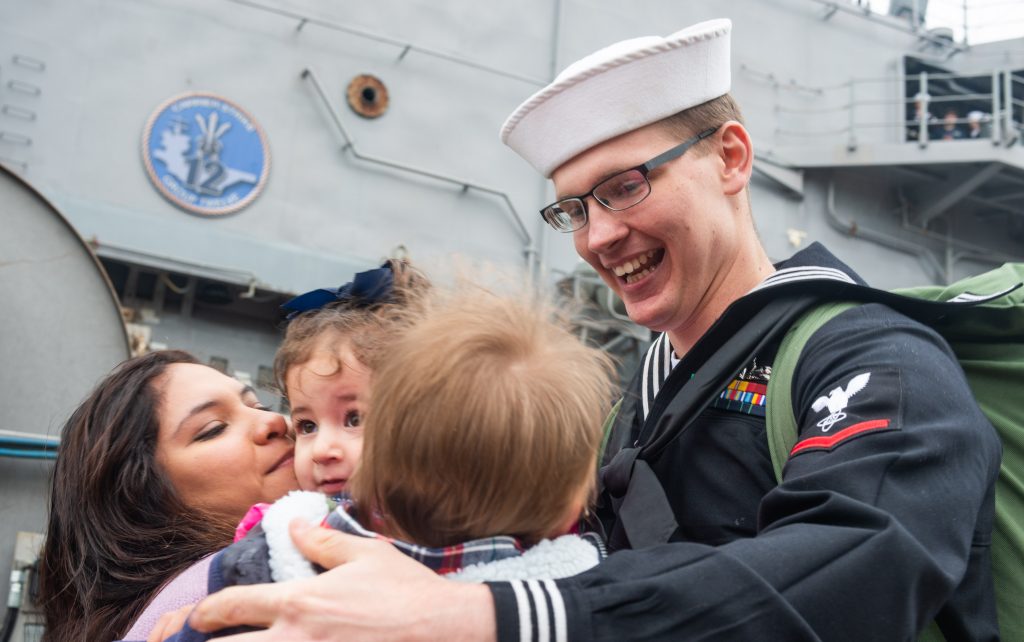 “I’m just glad to be home with my family,” Webster said seconds after kissing his wife Jessica on the pier where he got to hold his two children, Madelyn, 2, and Marshall, 1. “It was a long deployment and it showed how hard and unpredictable a deployment and the Navy can be.”

For those who were gone at the entire 283 days of the deployment, the Navy will pay them $16.50 per day in what’s called Hardship Duty Pay – Tempo. The pay kicks in on the 221st day gone and can’t exceed $495 per month.

For those gone the entire cruise, that amounts to an extra $1,040 in their pocket for their extra time gone.

Though a nice bonus, Webster’s wife wasn’t too excited about it.

“Yeah, extra money is nice,” she said. “But I’d rather have had him home for those days instead — but he’s home now and we’re excited about for that.”