NEWPORT NEWS, Va.  — The champagne bottle hit the cold steel hull, bounced off and it did not break.

Undaunted, the Honorable Caroline Bouvier Kennedy, former U.S. Ambassador to Japan and daughter of the late President John F. Kennedy pulled back and again swung the glass bottle with the force of a baseball player hitting a home run.

Uttering for the second time in 52-years “I christen thee United States Ship John F. Kennedy, may God bless this ship and all who sail her” – the second swing did the job.

It was official, the future aircraft carrier John F. Kennedy — also known as CVN-79 — the second ship to bear the name of the 35th U.S. President was now properly titled according to maritime lore. Ships not properly christened have been deemed unlucky by sailors — a very superstitious lot — for thousands of years.

But officials deemed Kennedy’s swing as “major league” and all was well for the second Ford-Class aircraft carrier that’s slated to join the fleet sometime in 2022.

None of the eight present on the christening platform was spared the bubbly-spray that etched the moment in history. The crowd cheered and found themselves in a downpour of red, white and blue confetti, launched from the ship as three F/A-18 Super Hornets from Carrier Air Wing 3 made a low pass over the crowd.

A panoramic image of the scene at Newport News shipyard as the crowd awaits the start of the christening ceremony. (Mark D. Faram)

The scene played out Dec. 7 as a crowd of 20,000 watched the Huntington Ingalls Newport News shipyard not far from where the Navy’s last ever conventional powered carrier — John F. Kennedy, known by the hull number of CV-67 had also been christened and then launched into the James River on May 27, 1967 by a then nine-year-old Caroline Kennedy.

“I’m so proud to be the sponsor of this ship and bring her to life,” Kennedy said in her remarks just before actual christening.

Kennedy told the crowd, she’d never imagined there would be yet another ship to bear her father’s name and believes the new ship will continue her father’s legacy proudly.

She said that her experience as the sponsor of the first Kennedy and getting to know sailors who served on ship “really gave me insight into who he was, and what kind of leader he was in a way that I wouldn’t have had any other way.” 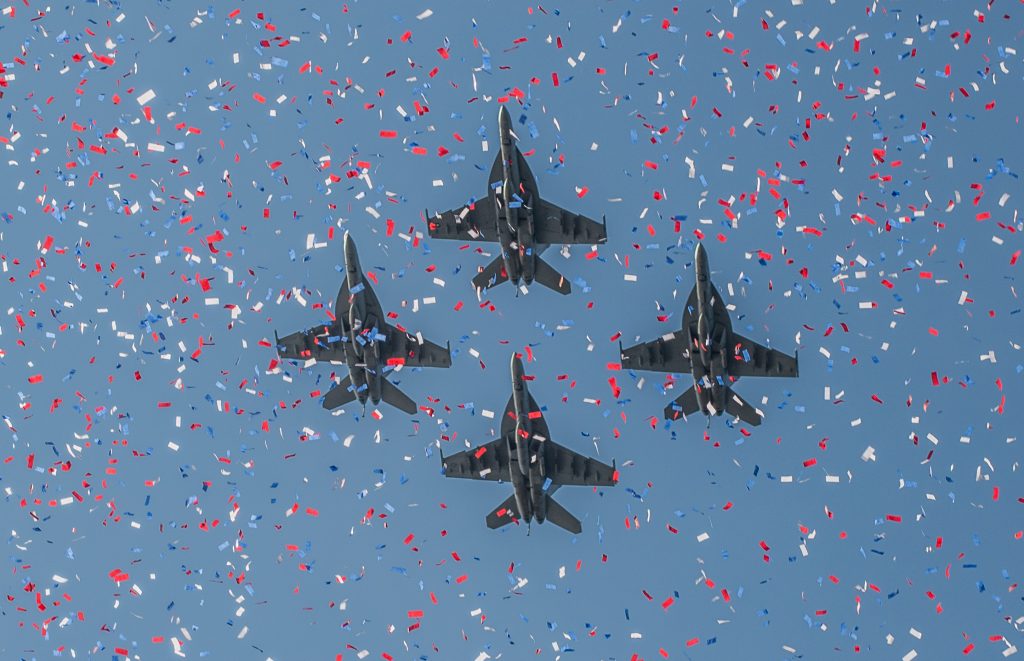 As she reprises her role as ship’s sponsor, “I know that’s going to be just as true now with a whole new generation,” said Kennedy. “The CVN-79 crew is fortunate to have such distinguished leaders, this is your day, and our chance to say thank you.”

Kennedy isn’t the first person to sponsor and christen two aircraft carriers sharing the same name. In 1936, then first lady Eleanor Roosevelt christened the nation’s fifth aircraft carrier as the Yorktown. When that ship was lost during the battle of Midway, the Navy immediately decided to bless another carrier with the same moniker.  Roosevelt reprised her role in January of 1943 with the Essex-class carrier Yorktown. Both those events also took place at the Newport News Shipyard.

The naming of CVN-79 is the first time the Navy has named a new flattop after a previous one since the Enterprise was launched in 1960. That name will become the first to grace three carriers when CVN-80 is laid down as the next Ford class carrier in a few years.

Acting Secretary of the Navy Thomas B. Modly was on hand and noted the significance December 7th has to the U.S. Navy and nation and now to CNV-79’s history, too.

“Today is the anniversary of the attack on Pearl Harbor, a day that forever changed the lives of brave American warriors like John F. Kennedy and transformed the way we fought as a Navy,” Modly said. “Much has changed over the past 78 years, but our nation, and our world, still needs brave American sailors like the ones who will operate and serve on this ship — Kennedy knew what it meant to serve, to lead, and to sacrifice and his legacy will continue with you.”

It was Bolden who gave the keynote address. A 1968 Naval Academy graduate who opted for the Marine Corps route, was a pilot and astronaut and who rose to lead National Aeronautics and Space Administration from 2007 to 2017.

In his address, Bolden emphasized the important role of our 35th president to our nation and the continuation of his legacy through the second Ford-class aircraft carrier.

That’s because, he said, the ship is “a symbol of our nation’s strength, technical achievement and critical service of our men and women.” 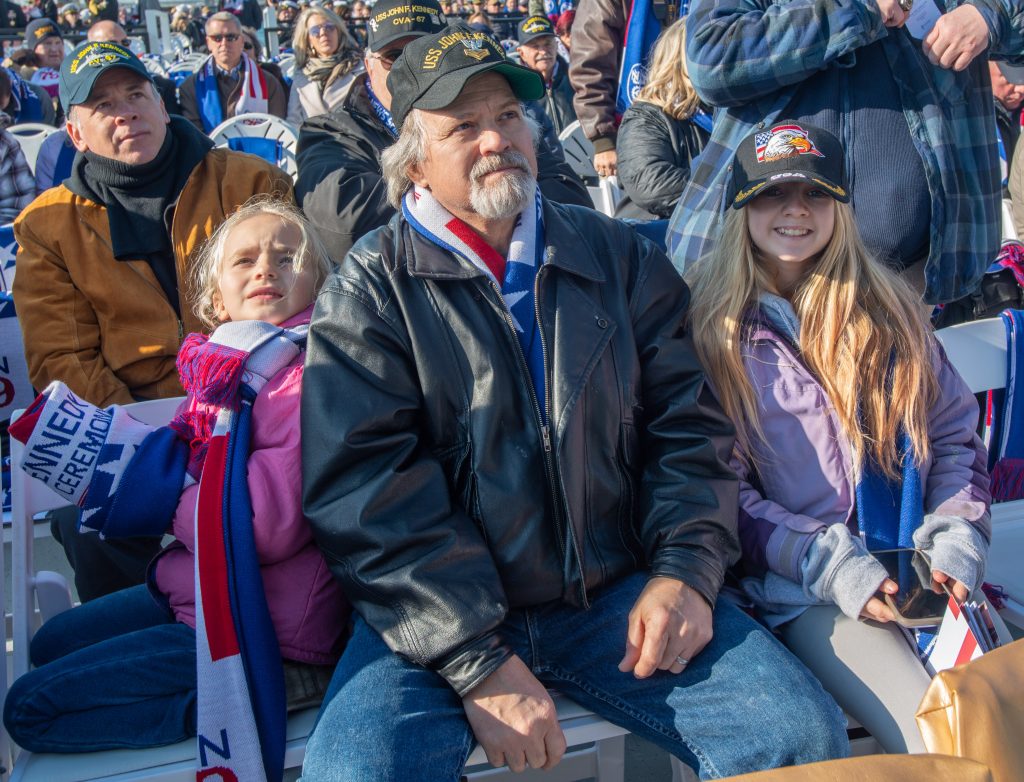 Retired Electronic Warfare Technician First Class Ralph Draeger from Lancaster Pa. made the trip to Newport news to “witness the honorable rebirth of my ship.” Draeger served on CV-67, the first carrier John F. Kennedy from 1981 to 1983. With him are his daughters, Jeannie (l) and Lucy (r). (Mark D. Faram)

Now that the ship has been christened, she’ll be moved from the dry dock of her birth into the James River and over to the shipyard’s outfitting pier where work will continue. While the ship is now 100 percent “structurally” complete , it’s only 67 percent done according to Marzano, who will now oversee the remaining work.

“CVN 79 has come a long way since I first observed initial construction in the dry dock back in 2015, following the keel laying,” said Marzano. “I’m incredibly honored, humbled, and excited to be given the opportunity to lead such an amazing team of high quality crew members.”

But he’s not stopping with the with his own crew. In the months since he reported for duty as the ship’s “prospective commanding officer” as pre-commissioning skippers are called, he’s also reached out to members of the previous Kennedy’s crew, too, hoping to establish continuity between the legacy of CV-67 and the yet-to-be created lore of CVN-79.

One of Marzano’s first stops was to visit Rear Adm. Earl “Buddy” Yates, the 96-year old first skipper of the Kennedy (CV-67) at his retirement home in Virginia Beach. The two have fast established a bond. Marzano now calls Yates a mentor and a friend from whom he’s learned “a lot of what it takes to put a ship and a crew together.”

Yates, too, was present in the crowd for the christening and his presence was noted, soliciting cheers from the many previous Kennedy crew members he was seated with.

But just hours later, led by Yates and Marzano, members of both crews gathered in a Virginia Beach restaurant where Yates surprised Marzano with the gift of a replica of John F. Kennedy’s famed rocking chair.  Kennedy would retire to his custom made rocker when his back — injured after his boat, the PT-109, was sunk in the Solomon Islands by a Japanese destroyer — would act up, giving him almost immediate relief. 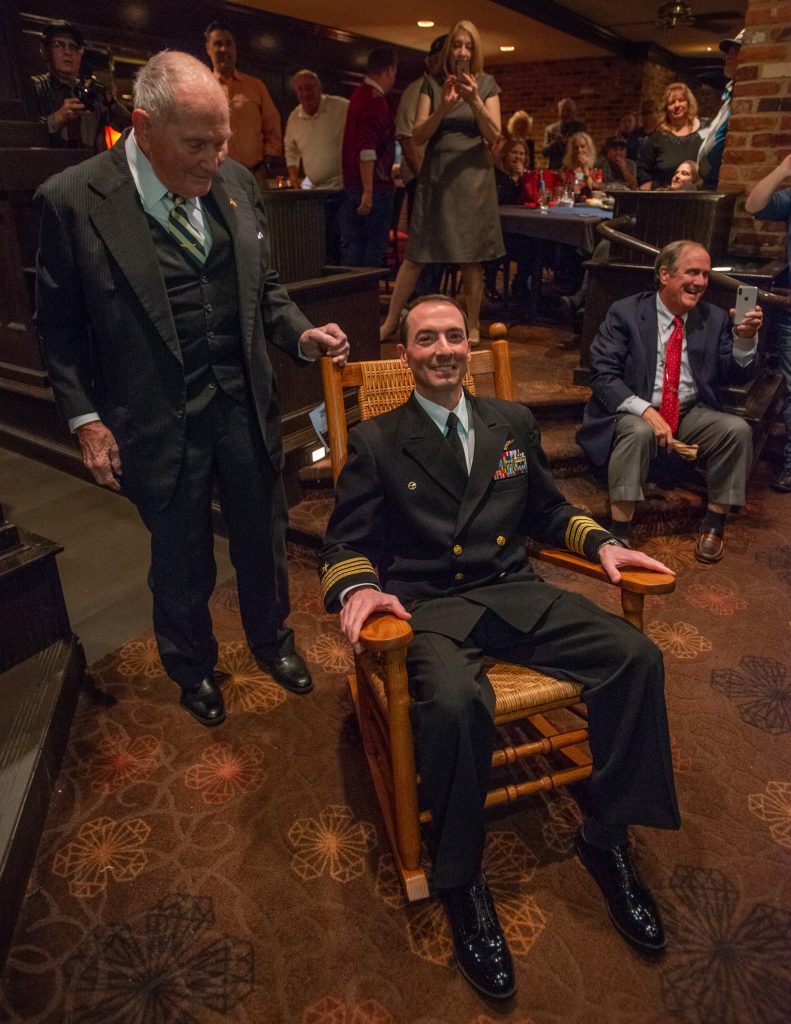 Asked about his feelings, Yates said the day was “incredible” and that Caroline’s two-swing was a “great job,” noting it was identical to her first effort in christening and launching the USS John F. Kennedy in 1967.

“It’s just another example of the continuity that is growing between the two ships and their sailors,” Yates told Defense & Aerospace Report after the rocker presentation. The former skipper said he was “very glad” when the Navy announced that the second Ford Class carrier would again be called the John F. Kennedy.

“He was a fighting son-of-a-bitch all the way — not only in the Navy, but he also saved us from nuclear war as president,” he said. “You build your team on the principals of who he was and the values he had and you can sleep very well at night.”