The trio of guided-missile destroyers  Mason, Nitze and Bainbridge, entered Chesapeake Bay and the Hampton Roads this morning just as rain and fog were clearing out. The return marked the end of a seven-month and four day cruise that saw the ships operating in the 6th and 5th Fleet areas of operation.

The ships, which are elements of Destroyer Squadron 2,  deployed April 1 as part of  a quintet of ships under the command of Carrier Strike Group 12.

The extension is necessary, officials say, because the aircraft carrier Harry S. Truman, which was slated to relieve Lincoln, wasn’t able to deploy on time due to an electrical issue. Navy officials say work to fix Truman is on going and expect the ship and air wing to deploy soon.

Norfolk, Va. — The guided-missile cruiser Leyte Gulf passes Buckroe Beach after leaving Norfolk on Deployment March 29. The ship left a couple days ahead of the rest of the Abraham Lincoln strike group, which departed April 1. (photo by Mark D. Faram)

Lincoln is in the middle of an around-the-world homeport change. Once she is relieved or released from her duties in 5th Fleet, she’ll continue steaming east to San Diego. The cruiser Leyte Gulf, meanwhile, will return to her homeport of Norfolk.

“I’m incredibly proud of how our sailors performed during this rigorous deployment. They can return home knowing that they made a positive impact for maritime security in some of the most consequential waterways in the world.”

Arriving in the Mediterranean in early April, the trio operated for most of the month in the 6th Fleet, all three ships were part of the dual-carrier operations and training conducted jointly by the Abraham Lincoln  and John C. Stennis Strike groups.

By May 9, all had transited the  Suez Canal and were operating in the Arabian Sea and the Persian Gulf, where they would remain for most of the rest of their deployments.

Much of their time until early summer the trio were involved heavily in the multi-national Operation Sentinel, charged with maintaining freedom of navigation in and out of the heavily transited Strait of Hormuz.

That operation kept the ships busy, often pushing the limits of their training as they battled the unexpected.

On May 25, Nitze was called to assist in the medical evacuation of a Polish merchant mariner aboard the French-flagged Motor Vessel Jules Verne in the Gulf of Aden.  The ship quickly launched an MH-60R Sea Hawk helicopter assigned to the “Grandmasters” of Helicopter Maritime Strike Squadron 46, who evacuated the patient and flew him to the Nitze.

“My crew responded to this mission expeditiously in the spirit of rendering immediate assistance to mariners in distress,” said Cmdr. Zoe Arantz, the ship’s skipper said in a press release at the time.

“Once aboard, my independent duty corpsman immediately went to work transporting the patient to the ship’s main medical in order to better assess his medical condition.

“The patient was stabilized on board Nitze,  and was later transferred in “good condition” to the expeditionary mobile base Lewis B. Puller for further medical attention, the release said.

Just after sunrise on June 13, Bainbridge found itself in the international spotlight after it was on the receiving end of a distress call from the Panamian-flagged Merchant Vessel Kokuka Courageous, which was  damaged in a suspected Iranian limpet mine attack while leaving the Gulf of Oman, en route to Singapore.

“Twenty-one mariners from the M/V Kokuka Courageous, who abandoned ship, were rescued and are currently aboard USS Bainbridge,” Lt. Col. Earl Brown, spokesman for the U.S. Central Command said in a June 13 press release. 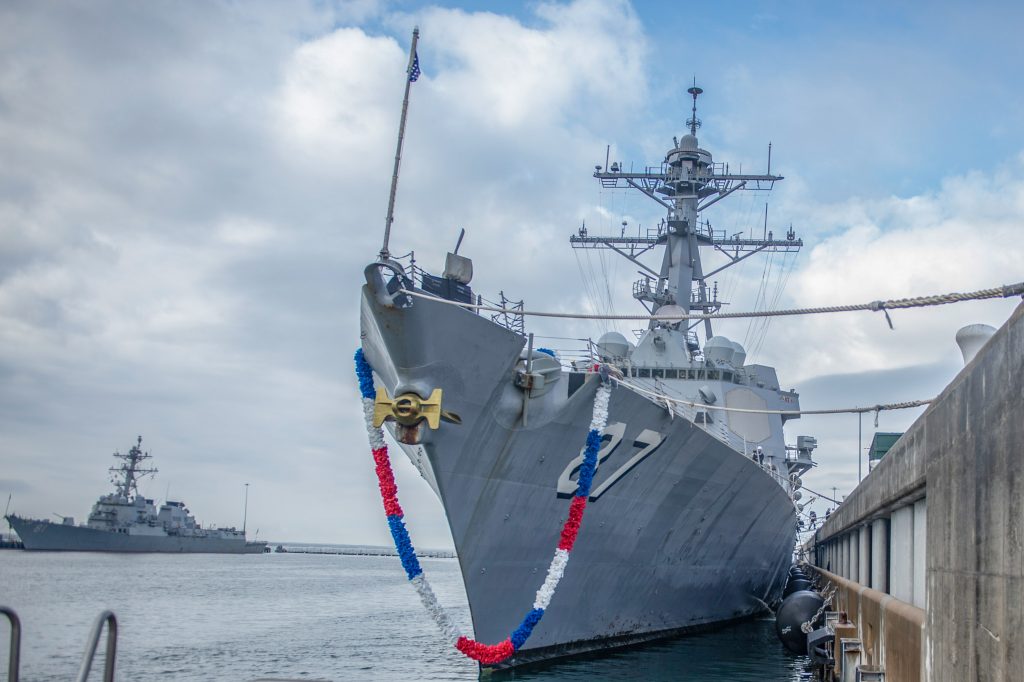 “USS Bainbridge remains in close contact with the M/V Kokuka Courageous and is the on-scene U.S. command authority. No interference with USS Bainbridge, or its mission, will be tolerated,” USS Mason is en route to the scene to provide assistance.”

The ships not only operated with their own strike group, but also spent time with the Kearsarge amphibious ready group, which was also operating in 5th Fleet at the same time.

The ships made multiple port visits in both the 5th and 6th Fleets with the Mason getting a two-day visit in June to June 10, Karachi, Pakistan, no something east coast-based ships do often.

Navy officials haven’t said when the Lincoln or the Leyte Gulf’s cruises will end. The latest extension on station was announced on Oct. 25 by Adm. Bob Burke, the vice chief of naval operations.

“She’s just over eight months right now because, as always, the world gets a vote,” Burke told reporters at the Military Reporters and Editors conference.

“Every sailor knows the world gets a vote, and we’re going to stay and do the job until they’re properly relieved.”