The Navy’s current 6th Fleet commander lives with great power competition every day. It’s front and center, as her sailors are operating daily in the same waters as a resurgent Russia modernizing its fleet and pushing out beyond its borders — making its presence known as they operate and exercise often or near the same locations where the US and NATO forces are.

It’s that view from the front window that causes the commander to deem “extremely important” the Navy’s commitment to rotate into theater the most modern destroyers, both in terms of presence to counter Russia as well as reinforcing the nation’s commitment to allies in the region.

She and her EUCOM bosses would like more, saying additional ships permanently based in Europe are truly needed to counter the Russian threat and are thinking creatively about what that could look like.

Meanwhile, she’s teaming up with the re-created U.S. 2nd Fleet, who she calls a critical partner in keeping sea lanes open and an expanding Russia in check. 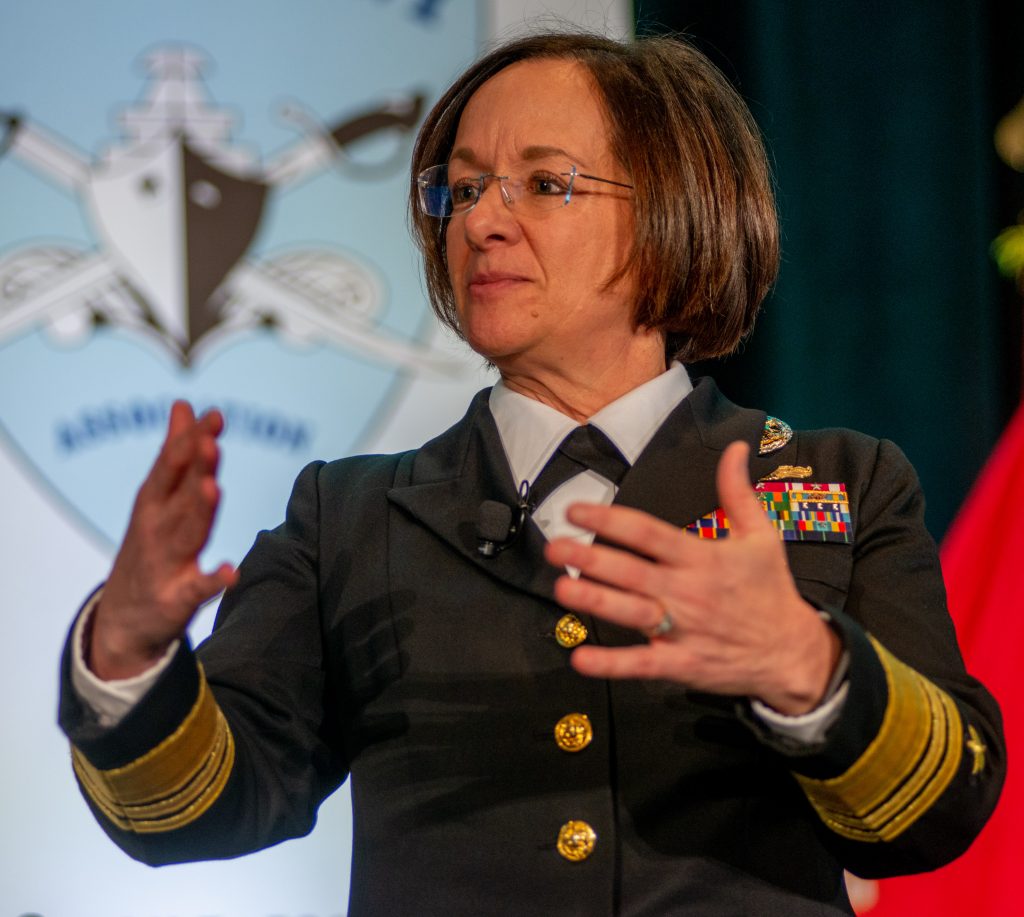 The Russian Navy is what’s on the mind of Vice Adm. Lisa Franchetti, the Navy’s fleet commander in Naples, as she spoke to Defense and Aerospace Report during a visit to the United States last week.

“Just during my time here we’ve seen a lot of activity from Russia,” she said. “If you look at how they’ve been leveraging the 49-year lease and their base out of Tartus, they have forward deployed submarines and ships there, and they are rotating these forces along with their activity in the eastern Mediterranean.”

That base was the result of a deal between Russia and the Syrian Government that gave Russia use of the territory for a period of 49-years. They can moor up to 11-ships at the base.

This year, a month after the US and its allies wrapped up their 2019 BALTOPS Exercise in the Baltic Sea, the Russians upped the ante and announced their 2019 version of Ocean Shield that would include even larger live-fire drills off Northern Norway. In the end, they operated for two weeks with 49 surface combatants, 20 support ships and 58 aircraft.

“This year, they exercised generally in the same area that we did, and they are continuing to work on their integration in a multi domain environment,” she said. “In terms of great power competition, we see Russia out there, we see them operating, we see them trying to modernize their force as well.”

With Russia stretching it’s sea legs not only in European waters, but on the high seas in the Atlantic, Franchetti says she’s glad to have the re-established 2nd Fleet to partner with.

“It’s great to have that eastern facing fleet on the east coast of the US to really focus on homeland defense, and force generation,” she said. “To give us the skills that we need over here, to fight the high end fight.”

But what she’s eyeing most are the new expeditionary maritime operations centers — known as MOC’s – that can be set up almost anywhere — allowing them to be close to the ship’s they’re controlling.

“I think it’s great that we can introduce agility into the fleet headquarters,” she said.

In the past few months, C2F first took 2nd Fleet headquarters forward to European waters to lead this year’s multi-national BALTOPS Exercise and “…now they’ve exercised this capability by operating the recently deployed East Coast Surface Action Group through an expeditionary maritime operations center in Keflavik, Iceland — this concept really gives us a lot of options.”

As the U.S. Navy moves to having their fleets being fighting units, she says being able to set up and deploy a maritime operations center as a breakthrough in naval operations.

“There may be others places that we could do it in the future, and we’ll certainly be experimenting with that,” she said.

She described the working relationship between 6th and 2nd Fleet as “fully integrated and very collaborative” in both planning and operations from the top down.

There are no turf wars between them, either — as any arbitrary lines of control just don’t exist this time around.

“We’ve been working really hard to make it as collaborative and as seamless as possible,” Franchetti said. “We both believe that there are no seams in the ocean, there’s no lines in the ocean — adversaries don’t recognize any lines in the ocean and we need to be able to move as seamlessly as the adversary, and don’t give them any places to exploit.” 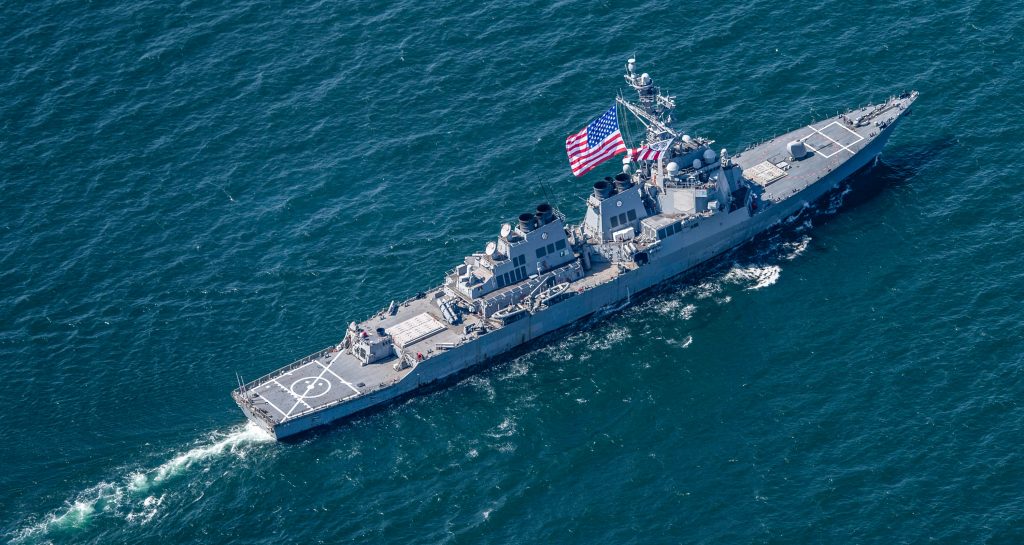 Franchetti said she and 2nd Fleet commander Vice Adm. Andrew “Woody” Lewis “constantly talk about different threats in the Atlantic, understanding what we’re doing, understanding what they’re doing, and how we can seamlessly hand these challenges over to each other back and forth,” she said.

Being  integrated together, “is really additive to all the combat power we have over here” in the European Command operations area.

For most of its existence since World War II, 6th Fleet’s combat power has come from forces deploying from the United States rotating through. For the most part, those have been carrier strike and amphibious ready groups.

Because maintenance issues have sidelined the aircraft carrier Harry S. Truman, the Navy deployed its escorts recently as a surface action group that has operated in 2nd, 6th and now the 5th Fleet areas.

This opportunity to change up how things are done, is good for fleets as well as deckplate commanders.

“Maritime forces in general are inherently flexible,” she said. “Our ability to scale up the size of the force, scale up the capability of the force to address the threat that we’re facing is all part of that flexibility.”

So having the commanding officer of [the guided-missile cruiser] Normandy, being in charge of that group,  working for 2nd fleet, and then handing it over to 6th fleet, she said, “…it’s just more flexibility we can provide to the decision makers for the job we’re trying to do today.

“Having a Surface Action Group, commanded by an O-6 and reporting to a fleet, is certainly a really good arrow to have in the quiver.”

And while she’s happy to welcome any forces deployed to her fleet, she’s also got an eye toward working with both the Pentagon and regional allies to gain more permanently forward-deployed ships to 6th fleet.

To date, the discussions have been to bring two more guided-missile destroyers to Rota, but haven’t moved much beyond the idea phase, yet. The former head if the U.S. European Command, Army Gen. Curtis Scaparrotti, and current commander, U.S. Air Force Gen. Tod Wolters, have made no secret that they’d like more destroyers in the region during this past year’s congressional testimony.

Scaparrotti, in his March 8 testimony to Congress was blunt saying more destroyers are needed  “to stay head of, frankly, the modernization we see in Russia’s maritime forces.”

“This is something that is still a thought piece, obviously something that we would have to talk about with our Spanish partners, and make sure that they would support that move,” she said. “But what I would say is it having six DDG’s in Rota will give us a lot more capability.”

The Rota-based DDG’s have two missions they need to balance, namely providing presence in the region as well as Ballistic Missile Defense.

“So as we look at great power competition, if we had two more DDG’s here you could essentially have three on patrol at any given time — which would give us opportunities to do more in the Baltic, more in the high north, even more potentially in the Arctic and maintain our presence in the Black Sea. Two additional DDGs here would get us the chance to put some more points on the board in great power competition.”

She’s also open to a different mix of ships in the European Theater, too, and wouldn’t bat an eye if the powers that be started looking basing more of a mix of ships in 6th Fleet such as cruisers, amphibious ships or even littoral combat ships.

Still, she stresses, any such moves would be predicated on the willingness of our allies to play host and a discussion in the Pentagon on strategic force lay.

For now, Franchetti says she’s happy to see the commitment the Navy has made to swap out the current four destroyers in Rota with more modernized versions.

“This is a very important set of moves for us,” she said. “We are going to get these great new DDG’s with a lot of capability that will be fully integrated with the helicopter squadron to bring us much better ASW capability, better BMD capability,” she said. “Having the newest and most capable DDG’s here sends a strong message to both the adversaries and the partners.”

In the short term, she said it gives 6th Fleet more capability. But in the long-term, committing to constant upgrading of the forward-deployed fleet on some type of a regular rotation is good for the ships, too.

“The commitment to bringing the ships back [to the United States] so they can get the longer term maintenance and upgrades that they need is also really important,” she said.