On Board the USS Bataan – As the Bataan amphibious ready group and the 26th Marine Expeditionary Unit ramp up for deployment, the Navy and Marine Corps team onboard the three ships is getting tight.

These sailors and Marines are not only learning high end naval warfare at sea, they’re also staying connected to the traditional amphibious bread and butter missions, too.

That’s essential for a force that must be as adaptable as a Swiss Army Knife. They’re learning much more, their leaders say, though security prevented them from getting into too much detail.  But what they’re most proud of is with every step, this “Blue/Green” team is emerging as a tight-knit naval fighting force that’s more integrated than any such “Gator” team in recent memory.

That team is based on three ships, besides the Norfolk-based amphibious assault ship Bataan, there’s the dock landing ship Oak Hill and the amphibious platform dock New York, which are homeported in Little Creek, Va. and Mayport, Fla. respectively.

For the last couple weeks these ships, known as Bataan amphibious ready group or ARG, have been prowling the coast the Carolinas. They’re reacting to daily training scenarios thrown at them in a month-long intensive final exam called a Composite Unit Training exercise.  This test is a sea-based dress rehearsal, testing their readiness to deploy. It will be up to their chain of command to decide if they’ve met the standard.

But with months of basic and integrated training behind them, they can’t help but wonder what’s ahead, too.

“The further we get into COMPTUEX, the more we think about deployment,” said Capt. Lance Lesher, commodore of Amphibious Squadron Eight based onboard Bataan. “That’s the reason we do this, to not only prepare, for deployment, but to get excited about it.”
As great power competition heats up across the world’s oceans, Lesher says this trio of ships and their embarked Marines, are expanding their mission set beyond what’s been the standard training and deploying fare for the Gator Navy over the past two decades — supporting operations in the Middle East.

“Now, with great power competition we’re kind of moving towards other areas,” Lesher said and though he couldn’t get into many specifics for security reasons said the focus now “is a little different” than “going to go to the Arabian Gulf and “doing mission sets we have been doing for the last 10, 15 to 20 years.”

Though Lesher says he’s not been clued in yet on the ARG’s ultimate destination on their upcoming float, what he has been told is they’re not “limited to one specific area.”

“What I’m getting from my bosses is that we are world-wide deployable,” Lesher said in a declaration that’s speaks to the recent evolution to more unpredictable cruises that don’t fall into the habits and locations haunted in the previous two decades.

Training for an unknown future has become an art as of late in the Navy. For the past couple years, the service has been gradually building its capability for what’s now called “Live Virtual Constructive” training. It was used during the spin up for both the Truman and Lincoln carrier strike groups. It’s a work in progress as the Navy upgrades its information systems infrastructure, but already the fleet is reaping the benefits.

“We can integrate live forces, forces in trainers, constructive forces that aren’t associated with any people at all,” Lesher said.

In essence, it’s a training force multiplier.  It allows training against a totally simulated foe or a mix of live and virtual enemies.

For example, Lesher said, they can dish up simulated air attacks for the ship to battle against. If the weather’s bad and the live foe’s aircraft can’t fly that day — they can flip on a virtual scenario. They’re so real, he said, that the sailors can’t tell the difference.

“The realism of doing that,” Lesher said is that you can fight against a force of any size, no longer being limited to just the opposing forces the Navy can put to sea to play that role.

On the Marine side of the house, there’s not much pre-deployment training that can be done virtually according to Col. Trevor Hall, who commands the 26th MEU.  Like the Navy, the Marines go through a building block training progression as they prepare for deploying. Along the way, they must learn and eventually prove they can handle “13 core mission essential tasks.”

These include everything from amphibious assault on contested beaches to at sea operations or delivering humanitarian assistance in the wake of natural or man-made disasters.

Though it all starts at the individual unit level learning the basics, what they are building is a close integration of the Navy and Marine Corps team — the closer the better in Hall’s book.

“I would say that 80 percent of our training centers around naval integration,” Hall said. 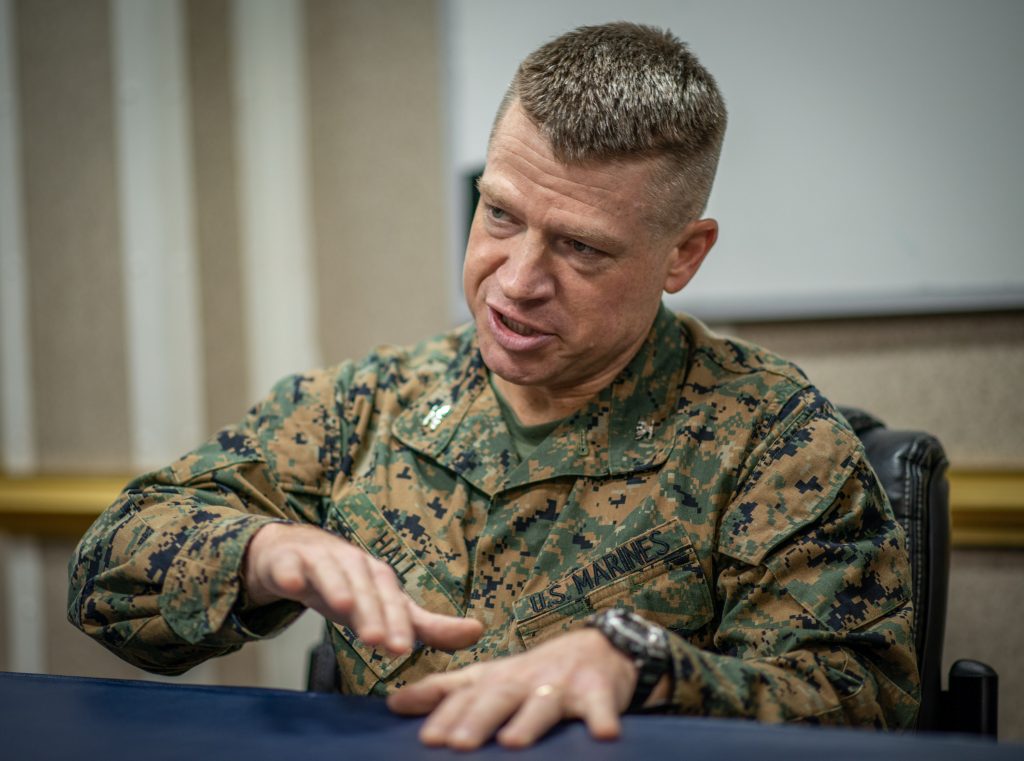 Mission accomplishment, he said, isn’t possible by either the Navy or Marine Corps alone. Only through tight integration is “80 percent of our capabilities” even possible, he said.

And the move to great power competition only makes that bond more important, he said. Gradually, he said.  the Corps is morphing training to have more of a “high-end” focus. But because they have such a broad spectrum of missions,  they still must be ready for those older mission sets, too.

“For us, the immediate change is a cultural change, it’s the way we think, the mindset of naval integration” Hall said. “You realize that as a naval force, we all have a share in this. Naval warfare is brutal as we’ve seen and it’s something we all have to take part in.”

That’s why Hall is pushing professional military education up and down the ranks of his Marines. And it’s not all about ground combat ashore. He’s also having them studying naval warfare and even getting hands on experience learning tasks long  considered “sailor only” work.

For example, Hall said, his Marines are now learning shipboard firefighting and damage control though he admits it’s a  “work in progress.”

It’s an idea that Lesher fully supports as the future could see ship sailing in contested waters. Ensuring all onboard know what bad things could happen and how to react,  “forces more and more integration” all the way down to the deckplate level.

“The idea is the whole ship sails or sinks together, with everybody onboard,” Lesher said. “That’s a wonderful way for everyone to understand immediately when they get on board that their actions have a direct impact on the ship, their shipmates and themselves.” 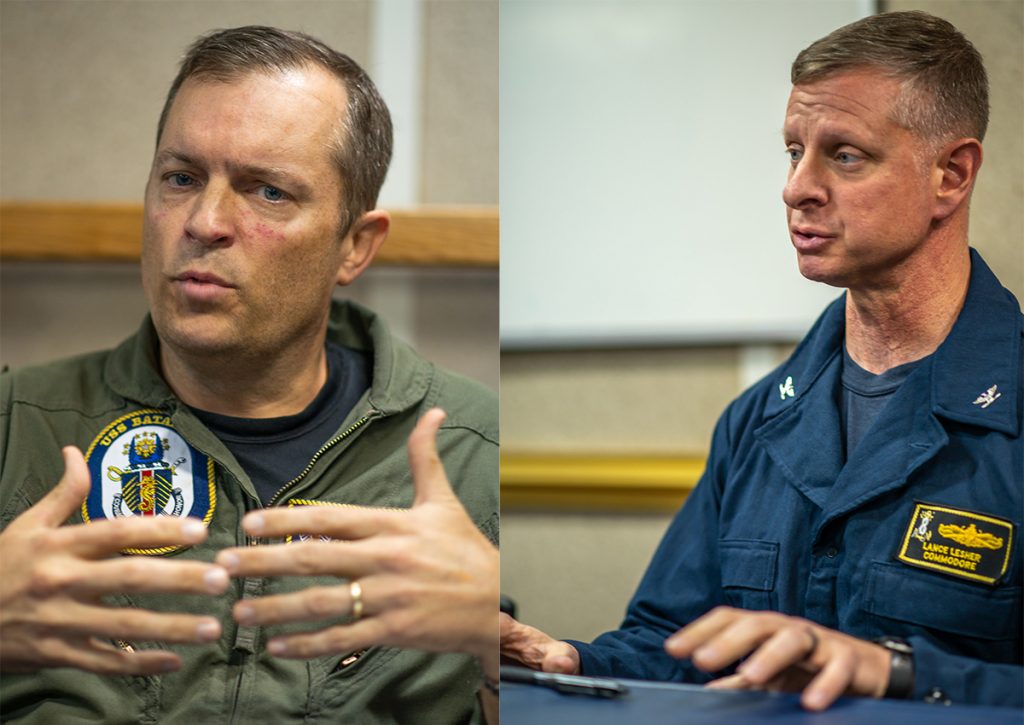 It’s a message that Bataan’s skipper, Capt. Greg Leland says is always being discussed with his sailors and used every excuse to keep his sailors engaged with training and operations.

To have such a “constant drumbeat” requires “relentless interaction with the troops” by  “the chief’s mess and the wardroom,” he said.

“Education is key,” Leland said. “PME happens on board and we have interactions between the blue and green sides to talk about what the various levels of warfare are — we must be an interdependent group of professionals.”

Then there’s the what happens when real world events can intervene, interrupting training while also providing the total team on Bataan with a mission.

Such was the case in September when Hurricane Dorian destroyed Abaco Island in the Bahamas.

Bataan was already at sea underway and running training scenarios as the storm approached.

“One scenario happened to be humanitarian assistance, which happened to get cancelled due to Hurricane Dorian,” Hall said.  “But we immediately made up for that lost training through real-world application.”

The only down side was the humanitarian mission took longer than the scenario was slated to run, he said, and “other training we had programmed” didn’t get done, he said.

“But you can’t substitute a training scenario for a real world application.”

For his crew, Leland said the mission to Great Abaco Island allowed the ship to really flex their amphibious muscles in a way they might not have done otherwise during their spin-up.

The end result for his crew was a monumental benefit and what he called a complement to their canned training scenarios.

For example, “Testing the coordination and logistics, what it takes to move, in this case, water and medical supplies from multiple platforms to multiple areas” he said “complements the skills we would have in our role as giving direct assistance to combat troops forward.”

The trio of ships will spend the rest October and into November before getting their final grades and a ticket to deploy, but already the team’s leadership is confident they’ll get the green light.

“It really all comes down to brilliance on the basics – that’s what this COMPTUEX is really all about — working together,” Hall concluded. “If we can do this mission and execution in a compressed timeline together, then when we go forward and we deploy, we can do just about anything.”