Onboard the USNS Eugene A. Obregon –  Twenty-Eight vessels held in reserve by the Military Sealift Command and Maritime Administration were ordered to activate and head to sea on Sept. 16 in the largest peacetime activation of the nation’s strategic reserve of sealift ships, ever.

Two-weeks later comes the news that a total of 33-ships were brought to life and sent to sea — five more than initially planned.

These ships are different flavors of cargo vessels the U. S. military keeps in a semi-ready state and tied up in ports up and down The Atlantic, Pacific and Gulf coasts. In time of war or military mobilization for a fight overseas, these ships are deemed critical to moving military supplies and machines to any fight overseas.

While the initial numbers are encouraging to the U.S. Transportation Command‘s top military officer, Army General Stephen R. Lyons, he says he’s withholding final judgement on how the ships performed until all the results are tallied up.

In addition, he’d like to see the program accelerate its modernization plans to be more effective in the future and the sooner, the better. 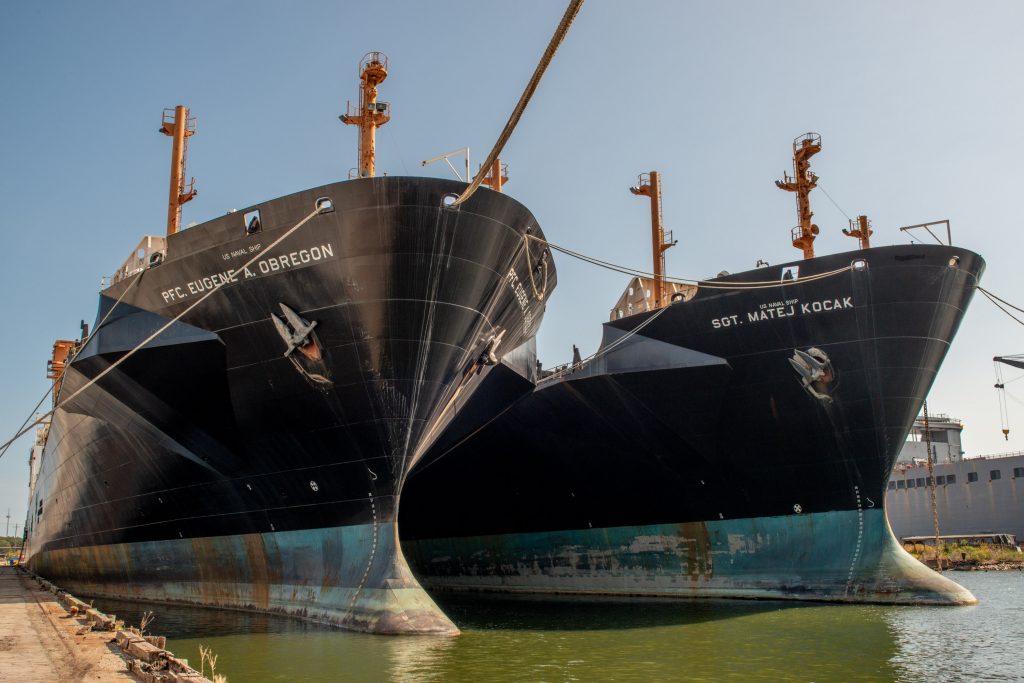 “Between 80-85%  of those ships [ordered to activate] appear upon the initial look to have successfully met the underway evaluation criteria,” said Navy Capt. Keven Stephens, Transportation Command spokesman told Defense and Aerospace Report. “There will be a few weeks of additional analysis before we finalize our assessment — we’ll want to review what happened with each individual vessel across a number of factors to better understand the readiness of the force.”

Those percentages Stephens stressed only denote those ships actually activated during the exercise and are not “an indication of the percentage of the total sealift force currently capable of going to sea,” Stephens said. “In about 30 days, we expect to issue a report with the final results of the exercise.”

Called a “Turbo Activation,” these no-notice activations have been going on since 1994 as a way to gauge the readiness of these critical reserve force cargo ships.  The September drill, though the largest ever activation in total numbers,  was actually the fourth such test this year. Most of the others involve either a single ship or a handful of vessels at most.

Turbo Activation starts pier-side for all vessels, Stephens said. “The ships transition from reduced operating status to fully operational status,” he said.  “At that time, the ship conducts at-sea operations for about two days and returns to port.

One vessel tabbed for this exercise was the Norfolk-based USNS PFC Eugene A. Obregon — an 821-foot container ship that is capable of transporting containers as well as roll on and roll off cargo, such as vehicles. The ship was built as a commercial container vessel in 1982 but purchased a year later by the Maritime Administration and converted in 1984 for military service. 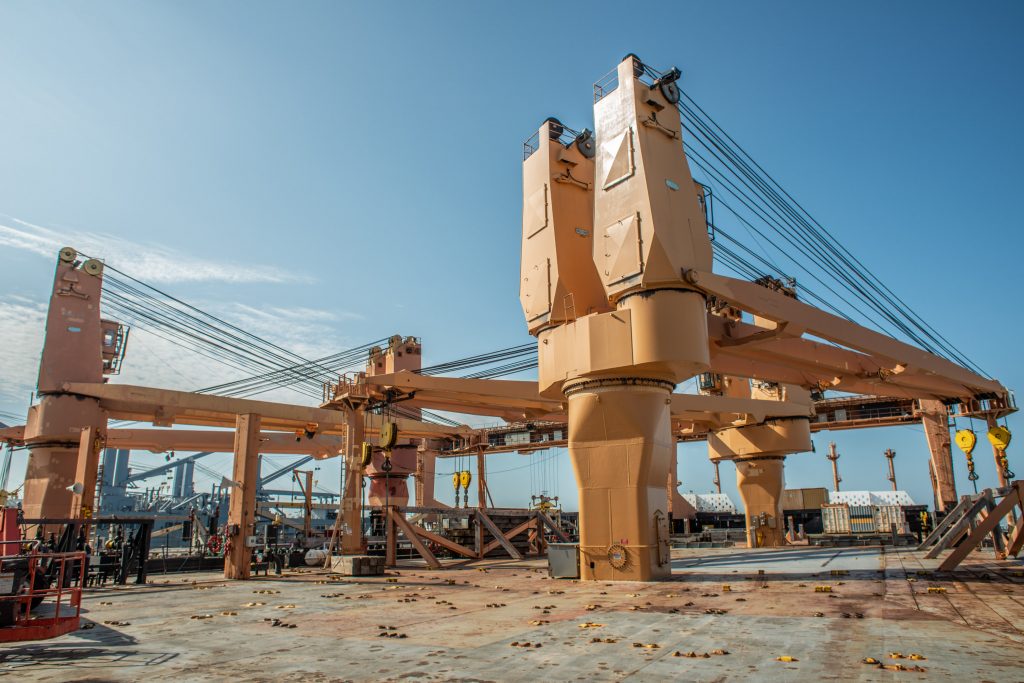 The Obregon has twin 50-ton cranes on her forward deck to lift cargo in and out of her holds. (Mark D. Faram)

The ship played a during the buildup of the first Gulf War, in 1990-91 as one of the nation’s first “Maritime Prepositioning Ships” that were forward-deployed ships fully stocked with equipment to supply a Marine Expeditionary Unit on a moment’s noticed. Though relieved of that duty, the ship also took part in 2003 U.S. military build-up before Operation Iraqi Freedom.

When not activated, the ship tied up at Lambert’s Point, just up the Elizabeth River from downtown Norfolk. Normally the the ship is maintained by a crew of nine merchant mariners. Once the order is given, within five days the ship must come up to its fully-crewed level of just over 30 mariners.

Once on board, the crew moves in and brings the ship to life. They most not only they prepare the living quarters and take on stores for the crew, but activate and test out the cargo gear, too. It all wraps up with a couple days at sea before it all reverses and the ship is returned to its dormant state.

Regardless of how well the ships performed on this latest exercise the reality is the ships are aging fast. This also means the older these ships get, the more difficult it is to keep them ready and activate them easily.  The average age of the ships in the U.S. strategic sealift fleet is 43 years, almost triple the 15-year average of ships in commercial fleets, today. 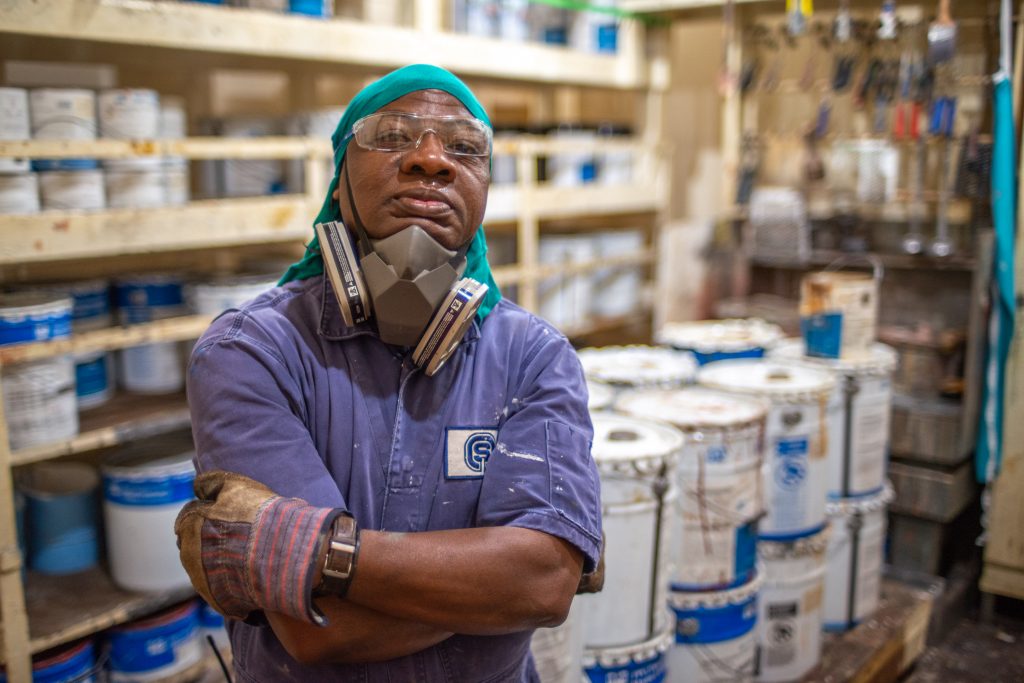 Michael Kanga, the Obregon’s Bosun pauses while tidying up the ship’s paint locker after the activation exercise. (Mark D. Faram)

Should the United States go to war overseas anywhere, it’s sealift that will take on the largest role in getting the military to the fight and sustaining the troops once there.  For example during Operation Iraqi Freedom, “91 percent of cargo deployed for that operation traveled by sea,” Stephens said.  “This figure is similar to the first Gulf War, when sealift accounted for 88 percent of total dry cargo.”

Right now, the nation has a total of 61 strategic sealift  ships. Fifteen of them are maintained and operated by the Navy’s Military Sealift Command. The remaining 46 are in the hands of the Department of Transportation’s Maritime Administration’s in what’s called their Ready Reserve Force.

When asked about his plans for reworking strategic sealift by a group of reporters in Washington D.C. Oct. 2, Lyons said he’s gaining traction with Congress and the Navy in kicking his rework efforts into higher gear. Those plans include building some new ships and modernize the newest ones in the existing fleet. In addition, he’d like to start buying some commercial vessels and converting them into military cargo vessels — as was done with the Obregon — as a cost effective alternative to new construction.

The Navy has already bought off on a proposal to fund two new sealift ships while picking up another five “used” from commercial shipping companies, Lyons told the reporters.

Though a good start, Lyons wants to increase buying used commercial ships to “accelerate” the recapitalization of the strategic sealift fleet. The Navy, he says is in favor of the idea and willing to help to find the money to make that happen. 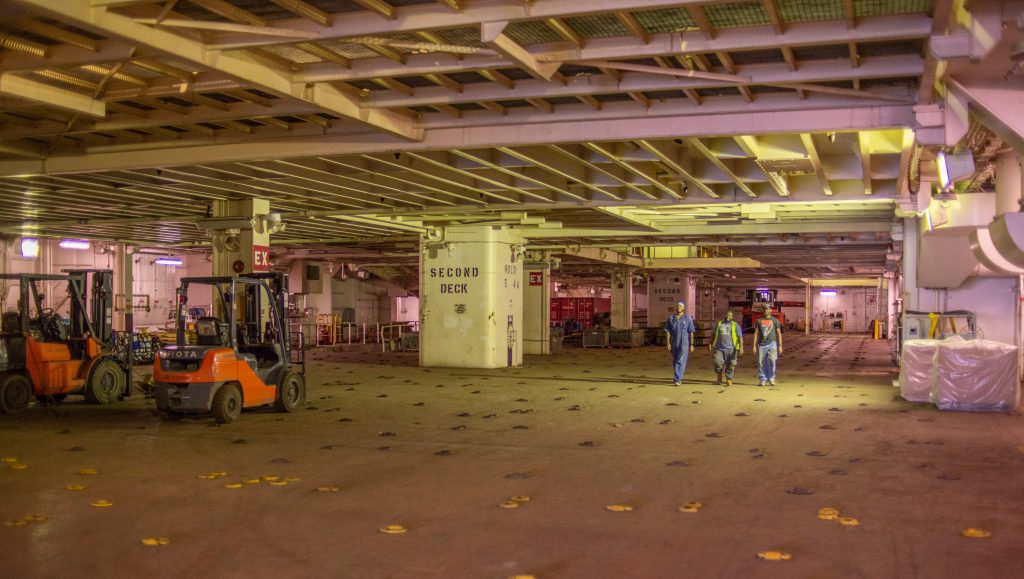 Merchant Mariners inspect one of the massive internal cargo bays of the container and roll on/roll off cargo ships PFC Eugene A. Obregon. (Mark D. Faram)