The nation’s second oldest aircraft carrier along with its strike group moved closer to deployment Sunday.

The ship arrived back at Naval Station, Norfolk in the early evening of Sept. 29. after completing the basic phase of their spin-up training.

Just completed by the aircraft carrier Dwight D. Eisenhower is a “Tailored Ship’s Training Availability,” an event capped off by a “Final Evaluation Problem.” This combination of events, put on by Naval Air Forces, Atlantic and the Navy’s Afloat Training Group, tests the ship’s training level to gauge how well each ship, assigned staffs and the air wing are not only trained as a unit, but also their ability to integrate with the strike group.

Now all the ships of Carrier Strike Group 10 will enter the “Integrated Phase” of their training the final leg of the road to deployment..

This final part of Navy’s “Optimized Fleet Response Plan” deployment cycle is wrapped up by another, more comprehensive test known as the “Composite Unit Training Exercise.”  Dished up by Carrier Strike Group 4 – and now U.S. Second Fleet –  this exam determines whether the strike group is fully integrated will be certified to deploy, or not.

Though the Navy doesn’t officially discuss schedules, officials say that final training phase will commence almost immediately and should wrap up in early calendar year 2020. But as always, that could slide either way, based on the needs of then nation.

“Ike Sailors have done it,” said Capt. Kyle Higgins, Ike’s commanding officer in a Sept. 29 press release. “Through a mixture of patience, determination, and perseverance, the Sailors of our mighty ship and the rest of the Ike Carrier Strike Group (CSG) completed our first Basic Phase work-up.” 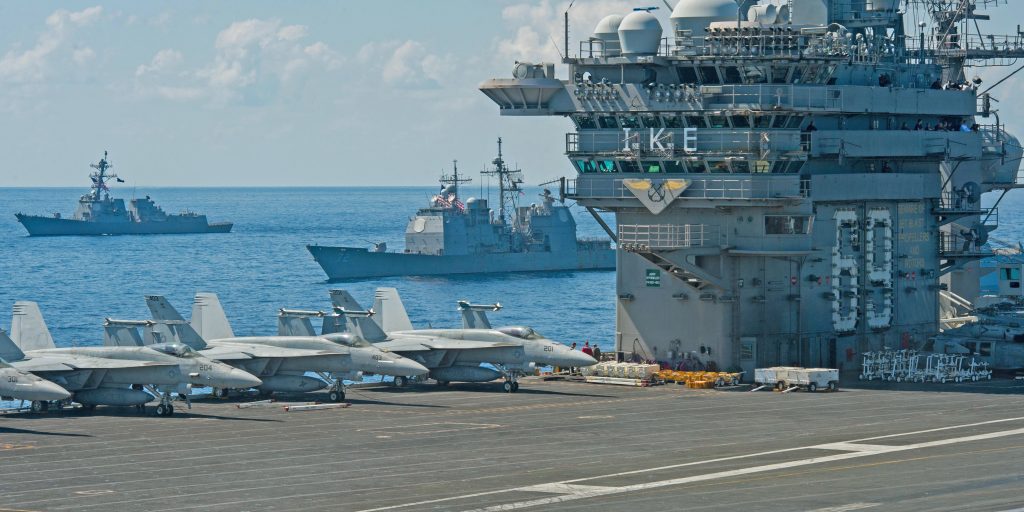 The Ike has only deployed twice since 2013 as the ship needed extended overhauls between each deployment to get up to snuff. The ship is in its final decade of operational life, now, expected to be decommissioned in 2028 after her 50-year life cycle is complete.

After returning from deployment in 2013, the ship needed a 23-month overhaul before working up and deploying in mid-2016, returning Dec. 30 of the same year. That overseas stint had the ship prowling he Mediterranean Sea and Persian Gulf, pummeling Islamic State targets on Syria and Iraq from both geographic locations with 1.4 million pounds of ordnance during nearly 2,000 sorties.

This time it’s been nearly three-years since the Ike returned from overseas.  Again, much of Ike’s time in Norfolk has been spent in an extended maintenance at period which started at Norfolk Naval Shipyard in Portsmouth, Va., in November, 2017.

That overhaul finished up six-months ago at Naval Station, Norfolk when the ship headed to sea for five days of sea trials on March 28.

And the ship has hardly stopped operating since, spending nearly half that time – 91 days – at sea, while launching nearly 2,400 aircraft sorties according to the release.

The ship got a few extra days at sea to train early this month, after a sortie to avoid Hurricane Dorian on Sept. 4. Ike returned to Norfolk on Sept. 7 and was underway again for her basic phase evaluation just two days later.

Over 15 separate training teams assisted put the crew through its paces to ensure everyone was “battle-tested and ready for the evaluators to come aboard,” the release said.

Once the evaluation commenced, not only was the ship tested in the ability to integrate with its strike group, “numerous drills and exercises” were thrown at the crew to determine their internal training level, too. Among these, the release said, were were mass casualty, shipboard firefighting, man overboard, and flight operations drills.

“Every member of every training team fully embraced their training responsibilities, and the crew performed at the highest levels” said Lt. Cmdr. Jamie Drage, the ship’s training officer. “We have made tremendous progress in a fast-paced training cycle, and our readiness is a direct reflection of the hard work and dedication of our sailors.”