WASHINGTON — The strenuous efforts being undertaken by the US Navy to maintain and update its fleet are clearly visible in ports near naval bases, where repair yards have as much business as they can handle. The service is moving to streamline and consolidate the contracting end of overhauls and group multiple ships under one contract award – an approach industry has asked for to gain greater workload stability. And a new senior position has been established in the Navy Department to focus on sustainment policy, planning and execution across the Navy and Marine Corps.

All the efforts, said the Navy’s top acquisition official, are aimed at preparing a fleet to be efficient not only in peace time, but also during times of conflict.

“We’ll never be done with this,” James Geurts, assistant secretary of the Navy for Research, Development and Acquisition, told reporters at the Pentagon Sept. 13. “We want to be efficient in peacetime but we’ve got to be effective in war.”

The Navy’s surface force has had to deal recently with emergent repairs – major situations that were not planned for but need to be taken care of. Three destroyers were seriously damaged in a relatively short time span – the John S. McCain and Fitzgerald in mid-2017 by collisions in the western Pacific, and the Oscar Austin in November 2018 by a serious fire while in overhaul in Norfolk, Va. The repairs are lengthy and expensive and have consumed resources that would have been used elsewhere. None of the ships have yet to be returned to service. In some ways the situation with the damaged ships represents the unplanned effects of combat.

“We’re looking hard at lessons learned, implications, things we can pull away if we’re in a fighting match,” Geurts said. “And we’ve got to do this in combat conditions at combat speed. We’re constantly challenging ourselves — are we really prepared to go out and do that?”

Geurts noted that, “acquisition and sustainment are absolutely tools of war. Every war game we see that. Part of ‘rigging for speed’ is not just delivering in peacetime, it’s really getting prepared for wartime. 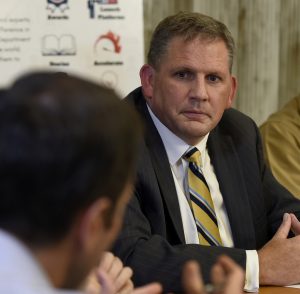 James Geurts has announced several initiatives to streamline and improve the US Navy’s fleet maintenance and sustainment efforts. (US Navy photo by Bobby Cummings)

“All of this I put in the larger context of, ‘ready’ to me means ready tonight to fight and ready for the fights of the future. It’s not just about meeting the schedule or meeting a budget target, it’s really being much more prepared than that. If we can’t do the peacetime stuff well, with credibility, then we’re really going to struggle in wartime mode.

“This is a long journey,” Geurts said. “It’s got a lot of important players – the industrial base, the supply base, the organic base are all really critical. This is something that’s on my mind as much as new shipbuilding things or the latest technology. We need all three of those things to be working well.”

To improve the Navy’s efforts to support and sustain its warfighting efforts Geurts announced a new civilian leadership position that will report directly to him. The deputy assistant secretary of the Navy for sustainment (DASN-S), Geurts said, will “develop, monitor and implement policy and guidance throughout the Navy” to support maintenance and modernization.

As of Sept. 23 no announcement has been made about who will become the first DASN-S.