The Navy announced the departures in a late Friday afternoon in a press release from U.S. 2nd Fleet. The deployment has been scheduled for some time. The Truman and the escort ships completed a Composite Unit Training Exercise in July as a fine tune-up for the cruise.

“Our ships remain flexible, ready and capable to operate in multiple theaters supporting a variety of missions.”

Though minus the striking power of the carrier and air wing, Navy officials say there’s still enough capability in a Surface Action Group to meet the national defense needs around the world.

“The Surface Action Group is capable of accomplishing the most in-demand high-end, naval mission sets in multiple theaters, to include anti-surface, anti-submarine warfare and maritime security operations in support of power projection around the globe,”  Lt. Cmdr. Ashley Hockycko, spokeswoman for U.S. Second Fleet in Norfolk told Defense and Aerospace Report Saturday.

“The group is trained, resourced, and ready to fight.”

As of noon on Saturday, all four ships were underway. 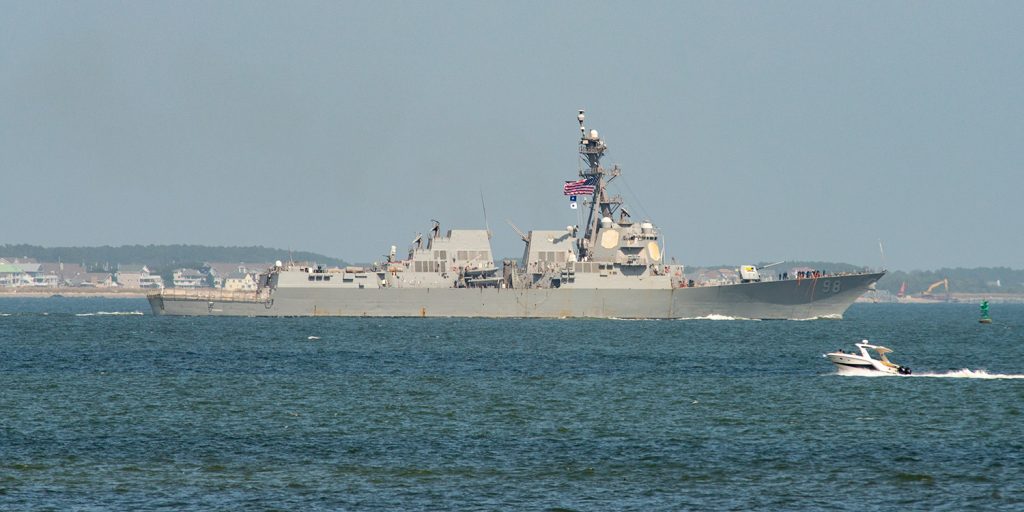 They were joined by the Norfolk-based guided-missile destroyer Forrest Sherman and her Mayport-based sister ship Farragut, which departed Norfolk and Mayport respectively on Saturday.

Detachments from Helicopter Maritime Squadron  72, from Naval Air Station Jacksonville will be embarked the ships for their deployments.

The Truman and embarked air wing are expected to follow sometime in the near future once the vessel’s maintenance issues are resolved. However, in keeping with standing Navy policy, the service is mum on details as to when that might be.

“In August, the Navy announced an emergent maintenance requirement for an electrical issue aboard USS Harry S. Truman,” the release said. Noting the aircraft carrier’s “repairs are progressing,” the release also said that “all efforts are being made to deploy the carrier and air wing as soon as possible.”

Navy officials confirmed to Defense and Aerospace Report the issue is a “malfunction within the ship’s electrical distribution system” but wouldn’t elaborate further.

“I cannot comment on the specifics of HST’s maintenance, but can say that the work is progressing,” Hockycko said. “The best and brightest engineers on the East Coast are working to repair the ship in a timely manner.”

The plan is still to deploy the carrier,  once the the ship is deemed ready to go, officials confirmed.

Lost in the hubbub of Truman’s inability to get underway with its escorts is the fact it’s the second deployment in as many years for the cruiser Normandy and the destroyers Farragut and Forrest Sherman. All three ships departed the East Coast on April 11, 2018 with Truman.

Truman, Normandy and Forrest Sherman were among the ships that returned stateside in July, 2018 for a “working port visit” before re-deploying overseas in August.

Farragut remained deployed and returned home in November, 2018 while the other ships returned to Norfolk on Dec. 17.  The cruise was a departure from what had become a predictable pattern for U.S. Navy strike groups over the past few decades.

Called Dynamic Force Employment, or DFE as it’s being referred to is designed to keep potential adversaries on their toes, while reassuring allies of the United State’s continuing support, officials said at the time.

Leading the Surface Action Group — the Navy’s first on the east coast since 2006,  will be the strike group’s Destroyer Squadron 28’s commodore, Capt. Jennifer Couture and her staff.

“We have an important mission ahead,” said Couture said in the release.

“SAG operations allow the commander tremendous flexibility and responsiveness in the types of missions that can be conducted, and geographic reach into varied and diverse areas. “

The SAG ships are ready and able to support a variety of exercises and missions with our partners and allies in support of maritime stability and security around the globe.”