The crowning achievement in the careers of some 5,000 enlisted sailors came today as pinning of the newest chief petty officers with the fouled anchors of their new rank began around the Navy.

Traditionally this hallowed and uniquely Navy day happens on Sept. 16. However, when that date falls on a Monday or over a weekend, the rules allow commands are allowed leeway in when they pin.

Ships at sea and other deployed units, too, can adjust their pinning days to fit their operational commitments.

This means there will be stragglers having ceremonies through Monday.

Most of the sailors are “frocked” to their new rank. It’s a Navy tradition that allows for the assumption of the rank privileges until their formal advancement date arrives, sometime in the next six months.

Though the focus of today’s celebrations is welcoming those new chief’s into the mess, the top enlisted sailor at Fleet Forces Command says, the event is a also time of renewal and refocusing within the over 30,000-strong Navy-wide CPO mess.

“I’ve been a chief petty officer for 18-years now and this very uniquely Navy milestone never gets old,” he said. 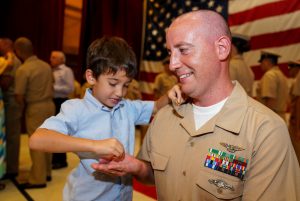 Guam (Sept. 13, 2019) Chief Yeoman David O’Leary, assigned to the submarine tender Frank Cable (AS 40), is pinned to the rank of chief petty officer by his son during a CPO pinning ceremony at Naval Base Guam. (MC2 Kelsey J. Hockenberger/Navy)

“Every year we get to see our chiefs mess family grow and for that, we are really fortunate and blessed to have a Navy that allows us to take this time to focus on our new chief selects before we pin them and put them leading sailors.”

For the past six-weeks these new senior enlisted sailors, picked by one of two selection boards this past June and July, faced a challenging intensive process known as “initiation.”

This training, wrote Master Chief Petty Officer of the Navy (SW/IW/AW) Russ Smith in an Navy-wide message to the new selectees on Aug. 1 is “a refined syllabus of comprehensive and thoughtful events” that are “woven together to carefully transform” first class petty officers into “basically-trained Chief Petty Officers.”

These events included problem solving events and seminars on how to use the newly acquired status as a chief to get things done as an individual chief, but more importantly as a part of the greater chief’s mess, too.

The training is intended to be hard, Smith wrote, telling the selects that they would have times where they would “experience the immense joy of success, and the desolate pain of failure.”

For most, it ended last night with what’s called a “capstone event” — a final exercise of up to 18-hours that combines all they’ve been taught since they learned of their selection.

The purpose of all this, Smith wrote to the newly picked chiefs is to “build you” and “make you stronger” to prepare you to“build teams ready to fight and win in combat.”

By the end of the training, Smith told them, the “Navy you have grown up in will look very different to you”  as you will now be on the “precipice of a new way of life.”

It’s not just the new chief selects who benefit from this training, O’Rawe said.

“It really enables us a time to come together, and reboot ourselves as chief petty officers and as a mess,” he said.

In teaching these selectees how to be “The Chief” it forces even the oldest of salts in the mess to “focus on our relationships with each other, to focus on our bonds to the mess,” he said.

In the end, O’Rawe said, both old and new chiefs come away with a renewed sense of “what is really valuable and important.”

“It culminates with this great ceremony that is such an emotional time for chiefs, for families and friends,” he said.

“You see the old chief’s with tears in their eyes, because they are so proud of these newest chiefs and what they’ve accomplished, he said.

And then the same thing for those, you know, those young new chief petty officers. They’re just overjoyed with, you know, being accepted into the family.

The average annual chance to make chief has been inching up in the past five years, with an average shot at putting on anchors sitting at , 23.89  percent. That’s up from the 10-year average 22.53 percent.

This year’s  25.85 percent shot to to move into the chief’s mess was a slight increase from last year’s 25.22 percent, according to the Navy and is the second best shot at anchors in the past decade.

A board of master chiefs met in Millington to cull through the records 18,350 eligible E-6s with at the ability to move a total of 4,744 first-class petty officers into the chief’s mess.

Another new selectee — the Navy’s new top officer, Adm. Mike Gilday penned a message to all the newly pinned chiefs on Sept. 4.

“As I reflect on the critical impact chief petty officers have had on my own life and career, I am convinced of the importance of the Mess as an institution,” Gilday wrote.

This institution, he wrote is not a space on a ship, a uniform insignia or a set of traditions, but “rather the sum total of daily acts – large and small, that chief’s routinely undertake to enable our sailors to perform at their very best.”

Calling the initiation process a “critical transformation,” Gilday told the new chiefs to “enliven” the mess every day as “none of us can afford to rest on our laurels,” because”the competitive environment today is to intense and the margins of victory will be close.”

Gilday detailed how his first chief instilled in him that “our most important weapons system is our Navy Team” its people.

“Today’s team is looking to you for training and mentorship,” he said. “We need your best efforts more than ever.”

Congratulations to all new chief petty officers. You can check out who made it, broken down by rating through the links, below.