The Tuskegee Airmen were the first African-American US military pilots.

“No standards were lowered for the pilots or any of the others who trained in operations, meteorology, intelligence, engineering, medicine or any of the other officer fields,” The Tuskegee Airmen National Historical Museum writes. “Enlisted members were trained to be aircraft and engine mechanics, armament specialists, radio repairmen, parachute riggers, control tower operators, policemen, administrative clerks and all of the other skills necessary to fully function as an Army Air Corp flying squadron or ground support unit.”

The training journey from cadet to Tuskegee Airman came in four phases: primary (theory-intensive, classroom-based study), basic (where they learned how to fly using the BT-13 trainer), advanced (where they switched to the the AT-6A Texan fighter aircraft) and advanced transition (where they upgraded to the P-40 Warhawk or AT-10 Wichita trainer), according to Randy Roughton of the Air Force News Service.

What became of the class after graduation?

“Davis was assigned to the base, and the other four became the first African-American flying officers in the 99th Pursuit Squadron,” Haulman writes. “Captain Davis was the first black American to hold a regular commission in the nation’s air arm, having transferred on graduation from the infantry to the Army Air Corps.”

According to the National Parks Service, once there, the 99th, along with “the 100th, 301st and 302nd African American fighter squadrons,” came together to form the 332nd Fighter Group.

“The 332d Fighter Group flew more than 3,000 missions in Europe and destroyed almost 300 enemy planes,” The National Archives and Records Administration writes. “Eighty-eight of the group’s pilots received the Distinguished Flying Cross, proving their test by fire a success.”

The 99th later deployed to Sicily and Italy, where the unit integrated with the 79th Fighter Group, with whom they also fought over Anzio in 1944, according to the university. 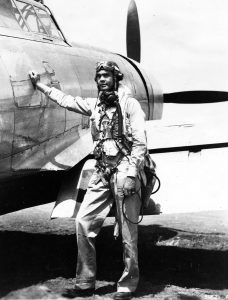 Despite their wartime successes, though, the Tuskegee Airmen faced a multitude of racial-based struggles.

According to Military.com, when the all-black 477th Bombardment Group was moved to Indiana’s Freeman Army Airfield, they were met with intense segregation and substandard housing conditions. They were also denied entry to the base’s officer’s club (despite a 1940 presidential order integrating such institutions) and treated as secondhand officers.

“He [base CO Col. Robert R. Selway] classified the Black airmen as “trainees,” even though they had all finished flight school, and therefore were all commissioned officers,” Military.com writes. As a result, they reportedly had to use a beat-up building that had previously served as an NCO club as a meeting place. Its nickname?  “Uncle Tom’s Cabin.”

Peaceful protests launched in response reportedly resulted in 61 arrests within a day’s time. In the wake of the arrests, the National Parks Service writes, the base CO issued a based order officially implementing segregation (punishable by imprisonment on base) at Freeman, and tried to force the black pilots to agree to it. When 101 of them wouldn’t, they wound up with charges. While most had charges dropped and wound up with letters in their files, two airmen were fined, and one was court-marshalled, dishonorably discharged and downgraded in rank, according to the NPS.  The ramifications were huge, though: Selway was replaced by then-Col. Davis, “two of the 477th bomb squadrons were inactivated,” and the 99th FS joined the 477th to form the 477th Composite Group.

Despite struggles like this one, the airmens’ collective perseverance paid off.

“The success of the Tuskegee Airmen proved to the American public that African Americans, when given the opportunity, could become effective military leaders and pilots,” the National Parks Service writes. “Modeled on the professionalism of Chief Alfred Anderson, Benjamin O. Davis, and Daniel ‘Chappie’ James, their performance helped pave the way for desegregation of the military, beginning with President Harry S Truman’s Executive Order 9981 in 1948.”

According to Encyclopaedia Brittanica, in addition to earning accolades such as “two Distinguished Service Medals and a Silver Star,” Davis’ post-WWII accomplishments include assisting with the desegregation of the US Air Force, serving as a fighter-wing commander during the Korean War, and — once a civilian — serving as the US Department of Transportation’s civil aviation security director.

President Bill Clinton named him a four-star general in 1998, and following his death in 2002, Davis “was buried with full honors at Arlington National Cemetery,” the Air Force News Service writes.