Welcome to the CavasShips Podcast with Christopher P. Cavas and Chris Servello…a weekly podcast looking at naval and maritime events and issues of the day – in the US, across the seas and around the world. This week…US Navy saturation diving is back, more than 25 years after the capability for extended deep-diving was eliminated. The commanding officer and one of the top divers of the Navy Experimental Diving Unit will be here to talk about what they do and how they just carried out a deep-dive real-world job at a depth of 475 feet.

Images from our discussion segment: 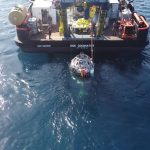 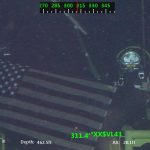 Reenlistment at nearly 500ft below the surface 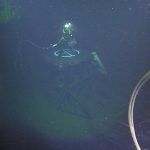 NEDU Divers at work on the undersea rescue testing platform

This Week’s Naval Round Up:

It’s been a tough week for naval aviation on the US west coast. On June 3 Lieutenant Richard Bullock was killed when his F/A-18E Super Hornet crashed near Trona, California during a training mission. Bullock was from Strike Fighter Squadron 113.

And on June 9 a Navy MH-60 Sierra helicopter crashed, also near El Centro, with four aboard. All survived, with one person suffering non-life-threatening injuries. The aircraft was from Helicopter Sea Combat Squadron Three based at Naval Air Station North Island CA.

The US State Department on June 8 approved a possible foreign military sale to Taiwan of about $120 million in spare ship parts. The Taiwanese Navy operates several former US Navy ships, including four missile destroyers. China immediately protested the arms sale, saying it would undermine China’s security interests and damage peace and stability in the Taiwan Straits.

Meanwhile Chinese military aircraft have been flying aggressively close to those of several US allies, including a Canadian aircraft monitoring North Korea and an Australian surveillance aircraft in the South China Sea, drawing protests from both countries. And the Washington Post on June 8 first reported construction of a new Chinese-funded naval facility near an existing base on southern Cambodia, which could give the Chinese Navy a base on the Gulf of Thailand.

In naval war news, Ukraine’s largest amphibious ship, the Polnocny C-class landing ship YURO OLEFIRENKO, was shown in a Russian drone video being attacked at sea on June 3 by Russian shore-based artillery. No hits were shown on the OLEFIRENKO in the video. The ship in April had been reported as captured by the Russians but apparently that was an error – one of many coming out of all sides in the Russia-Ukraine conflict.

The summer naval exercise season is in full swing. NATO-led BALTOPS in the Baltic Sea began in earnest June 5 with more than 40 NATO and partner nation warships involved, even as the Russian Baltic Fleet put about 20 ships to sea. In the Pacific the large Valiant Shield joint exercises kicked off June 6 in waters around Guam, the Marianas islands and Palau; the carriers ABRAHAM LINCOLN and RONALD REAGAN are taking part along with the assault ship TRIPOLI, which is operating as a so-called “Lightning Carrier” with about two dozen Marine Corps F-35B Lighting Joint Strike Fighters embarked. A number of other scheduled exercises also are taking place in the western Pacific, off the coast of Norway, in the Mediterranean Sea and off Africa. And the RIMPAC Rim of the Pacific Exercise – the world’s largest regularly-scheduled naval exercise is gearing up to begin June 29 out of Pearl Harbor and San Diego, running through August 4.

New ship news – a keel ceremony was held June 4 for the ballistic missile submarine District of Columbia at General Dynamics Electric Boat’s facility at Quonset Point, Rhode Island. Hours before the ceremony Navy Secretary Carlos Del Toro announced the change of the ship’s name from Columbia to District of Columbia – a change, he said in a press release, needed to avoid confusion with the Los Angeles-class attack submarine USS COLUMBIA SSN-771. The original ship’s name was announced in December 2016 with the understanding that the missile submarine would not likely enter service before the older sub left – a situation that has not changed. The change of name did not allow shipbuilder General Dynamics to modify the graphics used for the ceremony, only the name itself.

And the new amphibious ship RICHARD M McCOOL JUNIOR LPD29 is to be christened June 11 at Huntington Ingalls Shipbuiding’s Ingalls Shipyard in Pascagoula, Mississippi. The ship is the second Flight 1-Plus variant of the San Amtonio LPD-17 class of amphibious transport docks.

And in old ship news – British archeologists have announced the discovery of the wreck of the warship GLOUCESTER, sunk in 1682 after running around on a sandbank off the Norfolk coast. The shipwreck was discovered in 2007, only identified in 2012 and not made public until now for security reasons. Thousands of artifacts have been recovered, ranging from cannon to the ship’s bell to personal items. Maritime historians are calling the wreck the most important maritime find since the 16th-century wreck of the MARY ROSE.

I had the chance last week to attend a dinner commemorating the 1942 Battle of Midway. Like many “annual” affairs, it was the first get together in three years since the advent of the pandemic. The dinner has routinely honored, in person, veterans of the battle. The last time, five veterans were in attendance. This time, there was only one. Two had died, two were too infirm to make the trip, but we were lucky to have Chief Yeoman Bill Norberg with us – sharp, spry and convivial as always. At 99, he’ll turn 100 this November,

Don Casey was another veteran I knew – he’d married my mother’s cousin many moons ago and I knew him as a friendly, easy-going North Carolina hardware store owner and volunteer firefighter. He was also a World War II veteran who never missed the chance to talk about his experiences. He came ashore on June 6 at Normandy’s Utah Beach with the US Army’s 238th Engineer Combat Battalion. Fighting his way into Germany, he was wounded by a land mine in February 1945. After the war he attended the 238th’s very first reunion and never missed one. Eventually he was the unit’s last survivor, and on June 6 – yes, the anniversary of D-Day – he joined that last big reunion in the sky. He was five weeks short of turning 100.

Today there are fewer than 240,000 U.S. World War II military veterans still alive, according to the Veterans Administration, out of 16 million who were in uniform. 234 die each day. In four years there will be only about 50,000 left. And after that….

I have always been a sucker for sea stories – from those who served. From old-time journalists and broadcasters. From folks who simply where there and did that. Hearing of and thinking about the experiences of those who went before not only helps to remember them, it enriches our own lives. Listen to them, ask them, and most of all support them. Take advantage of them while they’re here. No one lasts forever.