On Board the USS Gerald R. Ford — The skipper of the world’s most technologically advanced aircraft carrier says the ship has”absolutely” turned the corner and is now ready to work towards full operational status.

After a 15-month stint back in the shipyard where the ship was built, most of its plethora of new technology is now up and running.  The ship is now ready to begin advanced trials as the crew and the Navy will now learn how to take Ford’s high-tech gear to the next level and earn a spot in the deployment rotation.

Capt. John J. “Yank” Cummings, a career fighter pilot, took the helm of the aircraft carrier Gerald R. Ford just days after she ship arrived back at the Huntington Ingalls Newport News Shipyard last summer. Now, he’s says he and his crew are happy the ship is nearing a clean bill of health. 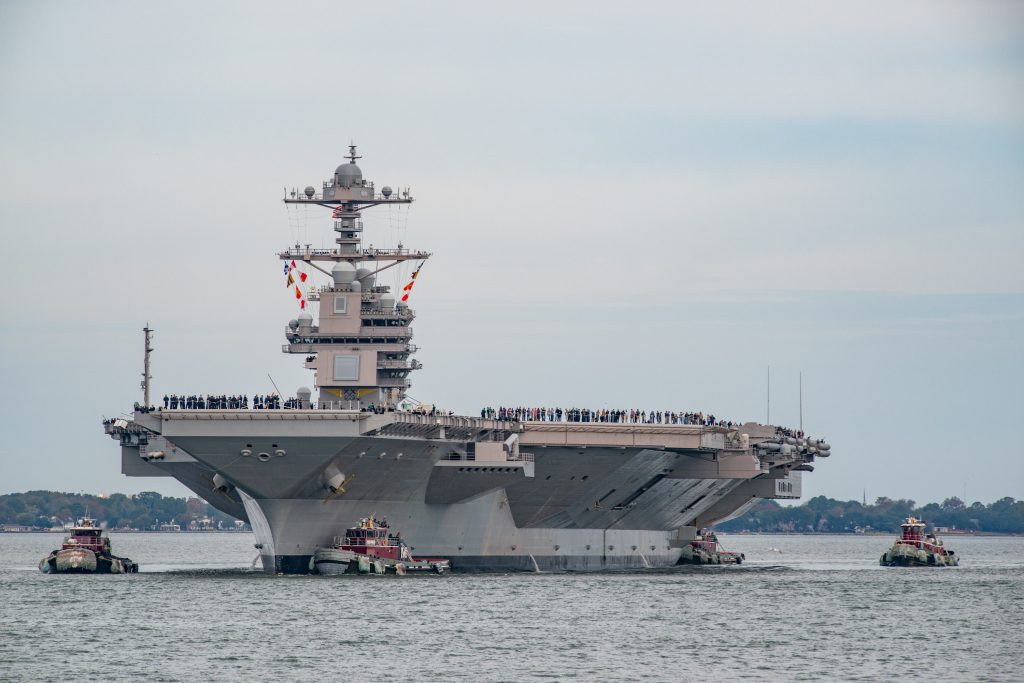 Cummings talked to media on boar the ship today, moments after their five-day at sea period ended as the ship tied up at Naval Station Norfolk’s Pier 11.  While underway is that nearly all of her ship systems were put to the test, he said, and passed.

“Our readiness is leaps and bounds over where we were 15 months ago and a majority of the stuff that got worked on got fixed,” Cummings said.

“All the work we’ve done on the ship in the last 15 months all came to that point the engine room, the radar, all of our systems worked perfectly for the six days of high-speed tests — it’s a very proud moment.”

The past few day’s success is a shining moment in the development of the Navy’s next class of flattops that was designed to take naval aviation to the next level. The promise of the Ford-Class ships is more combat power arising from a totally redesigned flight deck where the Navy put to use NASCAR  lessons learned, studying how teams quickly turn around cars during races. 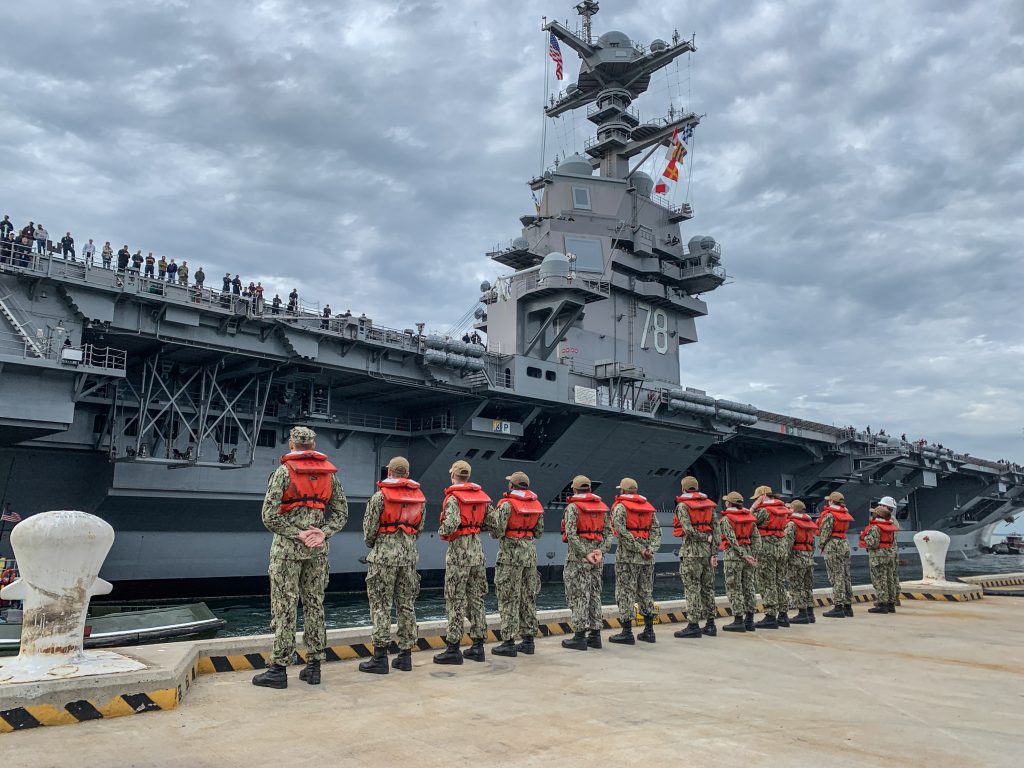 But before the Navy could start testing the reality of an expected 25-percent increase in the number of sorties the ship can fly in a day over what’s currently done on Nimitz-class carriers — the ship need to get all it’s parts and pieces up and running, first.

The past few days, according to to the Naval Sea Systems Command’s Rear Adm. Jim  Downey, the man in charge of overseeing the building and maintenance of the Navy’s flattop fleet, have proven the ship has finally worked out most of the kinks that have plagued the ship since even before it was commissioned in July of 2017.

“The ship got underway right on schedule on Friday — conducted over 100 events over the the last few days and was very successful overall.”

Up and running, he said, is the ship’s propulsion system that was put through the full range of testing both forward and backwards and even high-speed turns. There was no sign of the thrust bearing issues that led to breakdowns before the latest overhaul started.

“Throttle control…performed very well, overall,” Downey said “All four [main turbine generators] were online all of those fixes were demonstrated at sea.”

The navigation system got a workout and combat systems, which features the ship’s dual-band radar worked fine through its initial runs where it “tracked multiple targets.” 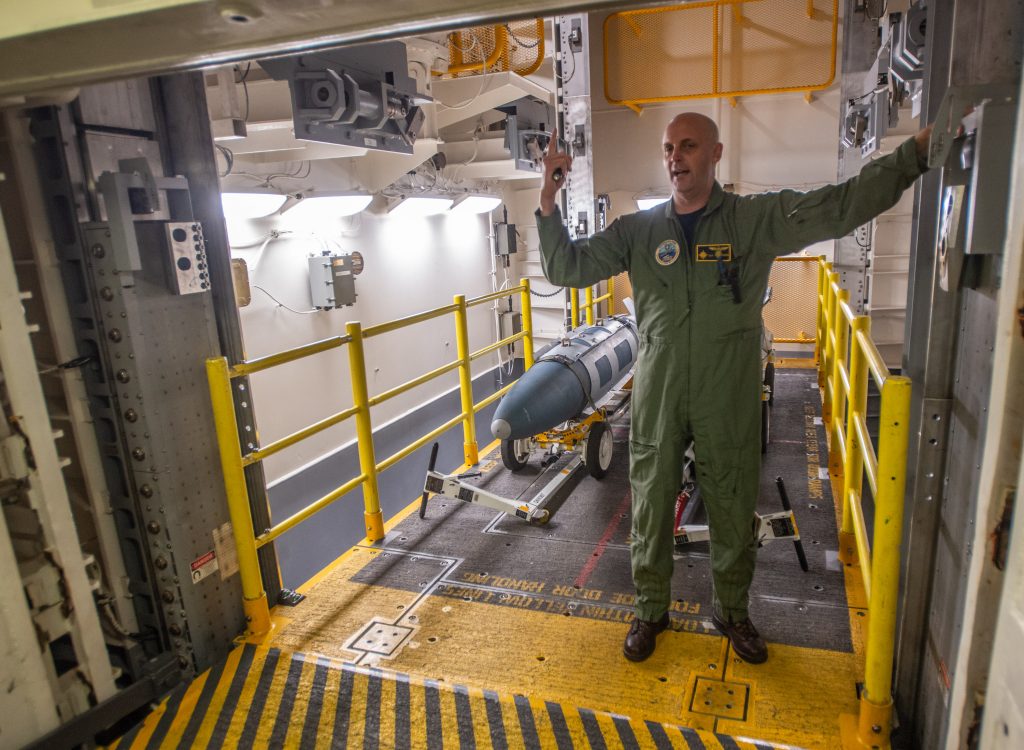 On Board the USS Gerald R. Ford — Captl John J. “Yank” Cummings demonstrates how the Ford’s Advanced Weapons Elevators operate while inside upper state elevator 3 on board the ship. (Mark D. Faram)

And though all the Advanced Weapons Elevators aren’t fully operational, yet, Downey said that all eleven will be operating by the end of the “post delivery testing and trials phase” which is expected to wrap up in the next 18 months.

While at sea, he said, the four elevators now fully operational got a workout while at sea. In addition, a fifth elevator, considered close close to certification was also run constantly and though it’s not fully certified, Downey said it “met all it’s requirements.”

What’s next for Ford, Downey said, is 18-months of what’s called “Post Delivery Testing and Trials.” Where where the ships systems will be tested separately and collectively as the crew continues to learn how to drive and fight the ship.

And sailors will now start earning their sea pay in a big way. Downey said plans for the next year and call for “the ship to underway half that time.”

Over the next few months, the ship will gear up for flight operations to begin in earnest starting at the beginning of next calendar year. The Electromagnetic Aircraft Launch System and the Advanced Arresting Gear — which both got upgrades during this past overhaul — are being brought back to life and will be turned over to the ship.

First, the ship must certify the flight deck for fixed-wing operations as it’s been nearly 18-months since their last time launching and recovering aircraft. Next, they’ll test out all the different types of aircraft expected operate from Ford’s deck.

By mid-2020, Rear Adm. Roy “Trigger” Kelly, commander of Naval Air Forces, Atlantic, said Ford will begin to work with the Naval Air Station, Oceana-based Carrier Air Wing 8. At that point, the crew will really begin to see what the ship can do, he said.

“It was such a successful sea trial that we’re seeing them come back one day early,” Kelly said.

“This is just the beginning as we begin this cycle getting them back over here to Norfolk, then begin the in and out cycle of getting underway, evaluating systems.”

Once these “test and trials” are over, Kelly said that the ship will have a final maintenance phase to tweak any problems or make any necessary changes.

“[We will] keep making improvements so we can get this most advanced aircraft carrier in the world to the point that it’s ready to deploy,” Kelly said.

On the ship, Cummings said that he’s seeing a noticeable rise in the crew’s morale as “we get back to sea” as “sailors get to do their jobs at sea.”

“It’s a huge moment for our ship — you can see it in the eyes of our sailors.”

Shipyard life, he says is “a different environment” and all were glad to “pull out of Newport News” and return to operating out of Norfolk saying he can “see the smiles on their faces, the enthusiasm and the energy.”

“So to look at it now, we’ve done a lot of work to make our ship a ship, we went out and proved our ship,” he said. “Now it’s time to prove it’s an aircraft carrier and for the next year and a half, that’s what we’re going to do.”