Norfolk, Va. — The Navy was kept in the dark by Huntington Ingalls’ leadership about the severity of engineering issues with Advanced Weapons Elevators on the aircraft carrier Gerald R. Ford according to Navy’s top civilian official speaking with reporters Sunday at Naval Station Norfolk.

Secretary of the Navy Richard Spencer minced no words after being questioned about the Ford’s struggles and recent lawmaker comments about the ship shortly after arriving back ashore from a several hour visit to the ship, which is undergoing trials off the Virginia Coast.

The Ford left the Huntington Ingalls Newport News Shipyard Friday morning and headed to back to open water three months later than originally expected. That’s because its expected 12-month post shakedown maintenance period slipped to 15-months, mainly because of those pesky weapons elevators.

The past week saw Ford’s struggles with it’s elevators and other technological-related snafus again come front and center, again. The repeated delays and cost overruns to date, drew the ire of lawmakers this past week on Capital Hill. 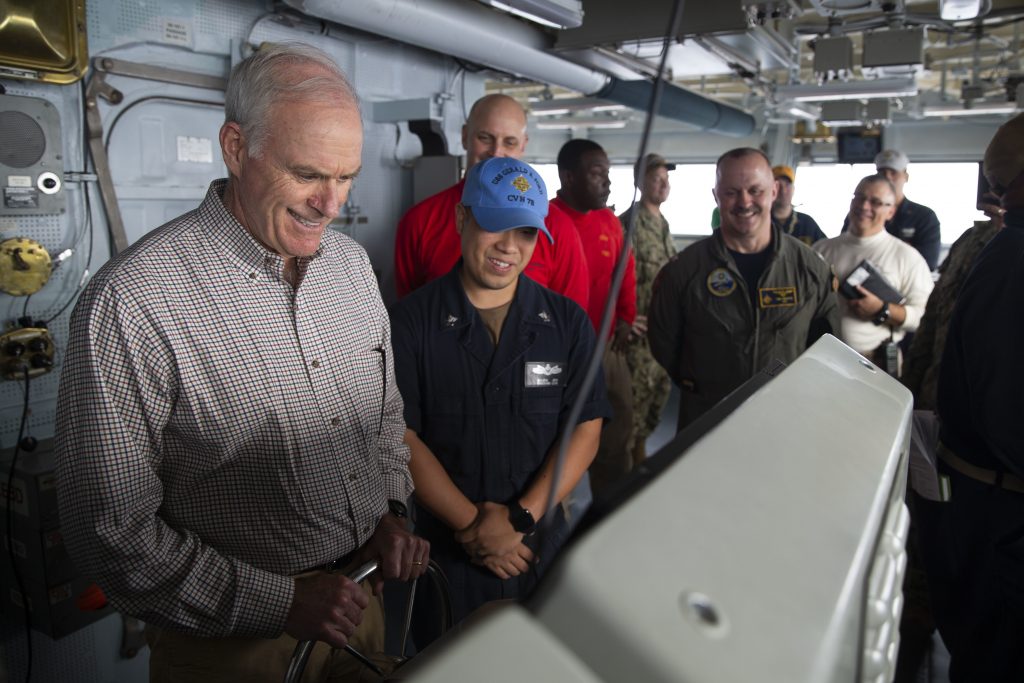 Spencer said he “gets” lawmakers concerns and embraces their role in giving oversight to the military, but felt Luria’s comments went a bit too far, he said.

“I was just concerned about was the fact that I have a whole bunch of people on both the deck side and pier side working their hearts out and to have disparaging comments like that didn’t really help me at all to get to my goal — which is to get the ship out,” he said.

Spencer lauded the work being done on the ship by what he described as an “energized” and “seamless” team of sailors and civilian yard workers working together ”to knock down these problems.”

His ire, he said, is with leadership at Huntington Ingalls and the shipyard for not communicating the problem up front.

The company originally promised the ship’ post-shakedown availability would end this past July 15, Spencer said, telling the Navy they were “fairly confident they’re going to get all the elevators done.”

That forecast changed in March, Spencer said, when “all of a sudden” the shipyard informed the Navy the elevators wouldn’t be completed until sometime in 2021 or 2022.

“That was a bit of a gut blow, which questioned in my mind, do they really know what the problem is?” Spencer said and adding “Navy came in and did what we should have done earlier” and “took control of the situation completely as it pertains to the elevator program” and “we got the issues knocked down.” 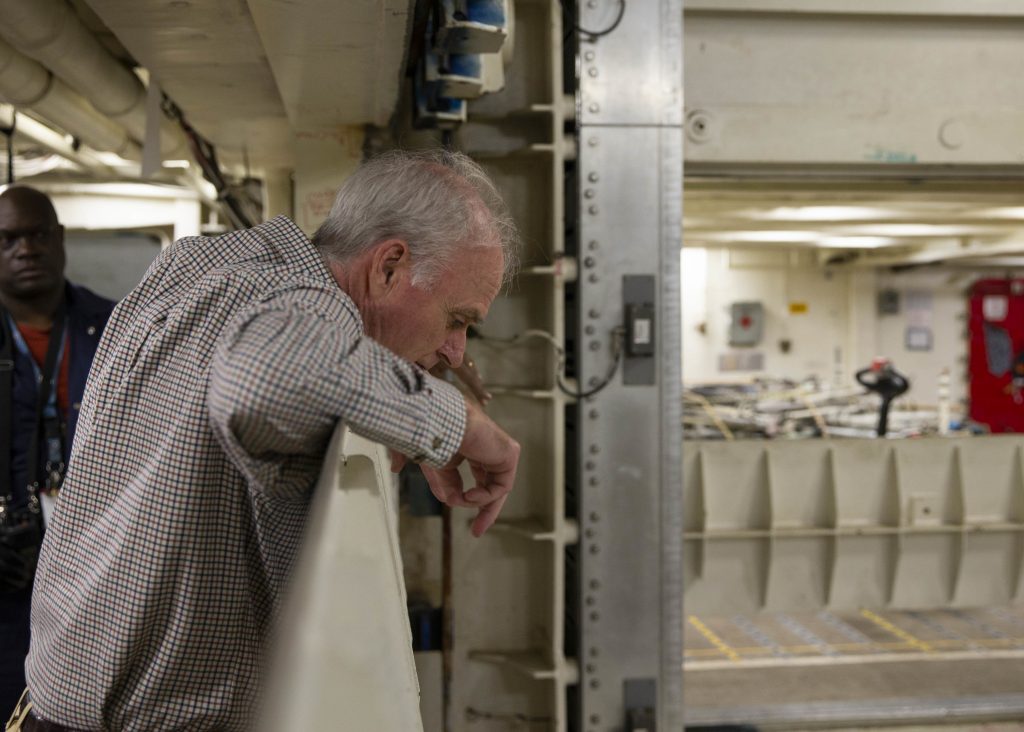 Huntington Ingalls didn’t comment directly on Spencer’s words, saying instead that the Ford, as a “first-in-class ship” has had “many unique challenges” according to Beci Brenton, spokeswoman for for the company.  While “most things have gone very well,” she said, “Some of the newer technologies have been more challenging than anticipated.

She echoed Spencers comments saying the company and the Navy have been “working closely” to resolve issues as they arise and praised the efforts of the shipbuilders finding fixes.

“With respect to the advanced weapon elevators, we have four certified elevators turned over to the Navy, and we are on a path to complete the remaining seven in the coming months,” she said. “We will continue to support our Navy partner in their preparations for the ship’s deployment.”

Spencer said he believes the ship and the program have turned a corner in recent months and the worst is behind the, how.

To date, he said, the ship has “seven moving elevators, of which four are certified” and handed over to the ship with “three others that are under various forms of testing.”

When asked how long now before the ship is combat-ready, Spencer said “I’ll let you know” saying the ship can’t become combat ready until she is “given to the Navy” and put through a full work-up cycle.

That’s because of necessary milestones in the ship’s immediate future, such as “Post Delivery Tests and Trials, Full Ship Shock Trials”, and a “Planned Incremental [Maintenance] Availability,” which all must happen before the ship can begin working up for deployment, officials told Defense & Aerospace Report this week.

But that work-up and deployment, Spencer said, is “going to be way before 2024, I guarantee you that.”

When asked about the rest of the ship’s issues in getting the plethora of new technology crammed into the ship’s hull working, he noted that it was former Secretary of Defense Don Rumsfeld who made that decision to load Ford up with a record amount of new, and at the time, untested technology.

Those leaps, he said, had originally been slated to happen gradually over the first few ships of the Ford Class.

“That’s a pretty big bite…it’s been tough.,” Spencer said. “The major technologies that we put on board this ship are working.”

He cited that the ship’s Electromagnetic Aircraft Launch System known as EMALS and its companion, the Advanced Arresting Gear or AAG are “signed off and fully functional. In addition, he noted that despite an initial casualty when the ship headed to sea, those issues were ironed out and ” the ship is out there operating with a fully functional dual band radar.” 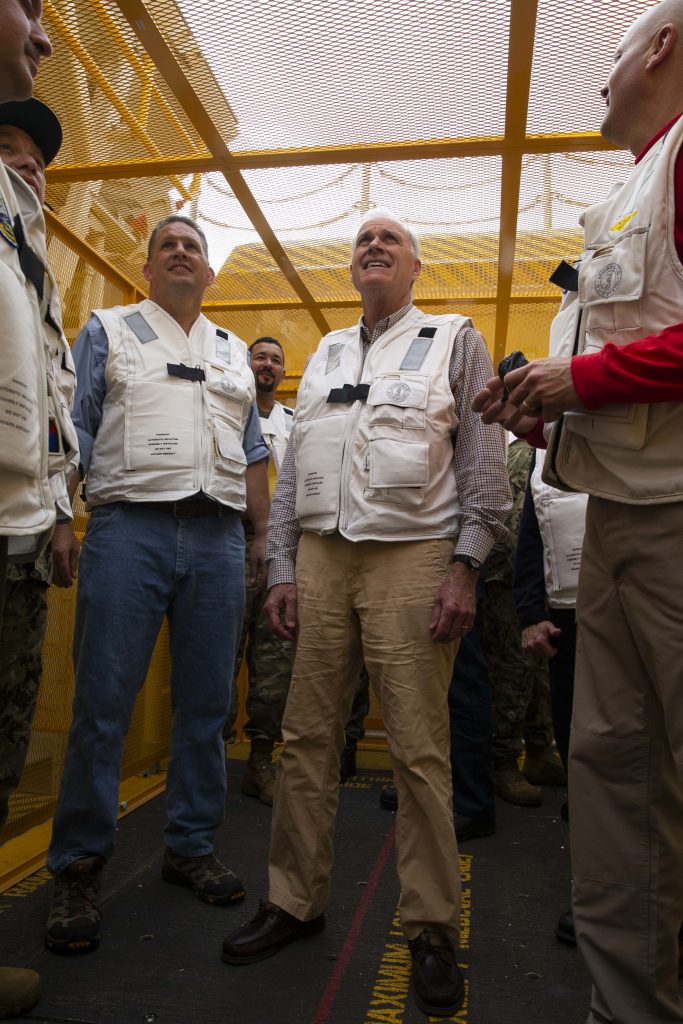 Despite the Ford’s hiccups and delays, Spencer says he’s “excited” about what Ford Class of aircraft carriers will bring to the table.

And with the christening of the next ship in the class, the future John F. Kennedy just weeks away, he says what were the tough lessons from the Ford are becoming a benefit as the Navy and the shipyard builds the Kennedy.

“Kennedy is about 3.2 million man hours ahead of where Ford was at this exact same time and its life,” Spencer said, calling that a “learning curve” of 18 percent.”

“The issues with the elevators that we’re slaving away with, when we find a fix here is being immediately walked over to the Kennedy,” he said. “I think what you’re going to see is learning put into action with Kennedy, and you’ll see it out quicker.”

Spencer was also asked about maintenance issues with the rest of the fleet and the Navy’s efforts to dig out from years of deferred maintenance on many of its ships.

“The benchmark state of our surface warfare ships were at an all time low, we have to get them up to a standard level where we can get them through maintenance, so they’re not going to take 30 months,” Spencer said.

This, he attributes to a combination of factors that includes budget cuts, sequestration and operating continuing resolutions coupled with a steady increase of operational tempo over the last 10 to 12 years.

“At the end of the day, we’re meeting the requirements,” Spencer said. “Are we doing it in the most efficient and effective manner- no. ”

But he says that two-years of regular funding of maintenance is “sending a signal to industry” and now they’re gearing up to handle more work, he said, resulting in the Navy “getting ships through on the surface side faster than we were before” but stated that the service still has a ways to go to catch up.