On Oct. 4, 1957 at 7:28 p.m., the Soviet Union launched Sputnik 1, the world’s first man-made satellite to circle the Earth, sparking a space race that spurred US advances in education and technology that a dozen years later landed a man on the Moon. According to NASA, the cosmic bundle of joy weighed in at 83.6 kilograms and measured 58 centimeters tall. Sputnik reportedly soared at 28,980 km/hr, according to Soviet math, the Museum of Flight writes.

“The pressurized sphere made of aluminum alloy had five primary scientific objectives: Test the method of placing an artificial satellite into Earth orbit; provide information on the density of the atmosphere by calculating its lifetime in orbit; test radio and optical methods of orbital tracking; determine the effects of radio wave propagation though the atmosphere; and, check principles of pressurization used on the satellites,” NASA writes.

But though Sputnik was small, it caused a mighty uproar during the Cold War. The successful Soviet launch intensified the public’s insecurity in the U.S. military. If Russia could launch a spacecraft into orbit, it had rockets powerful enough to launch a nuclear weapon that could reach the United States. And Russia’s rocket had succeeded while American attempts had failed, despite efforts to meet a challenge by the International Council of Scientific Unions to debut satellite technology by a 1958 deadline, according to the US State Department’s Office of the Historian. The National Academy of Science writes that the International Geophysical Year, “a comprehensive series of global geophysical activities to span the period July 1957-December 1958,” was actually brainstormed in 1952 and garnered the participation of 67 nations by its close. 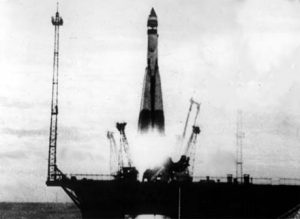 Sputnik 1 was launched from the Baikonur Cosmodrome in Tyuratam in the U.S.S.R, located in present-day Toretam, Kazakhstan — still a key Russian rocket center — and orbited the Earth until Jan. 4, 1958, according to NASA. Sputnik’s launch also utilized a Vostok rocket, a member of the family of R-7 rockets still used in modern-day Soyuz launches, as noted on HistoricSpacecraft.com.